If I haven't mentioned it before I have to tell you that my husband is one of the most talented chefs I know. I am a lucky, lucky girl! He has been know to whip up a Thanksgiving feast for more than 20 without breaking a sweat, make homemade soup and buns for 75, cook an entire meal on our outdoor fire pit, jam jam cookies for playschool and brunches that rival those at the Banff Spring Hotel! He is the only guy I know who can be off work because of the flu and sits with his gingerale and barf bucket on the couch watching The Food Channel. I couldn't stand watching "Chef at Home" roast a salmon in a pit in his backyard on a queasy stomach. We have enjoyed creamed fish recipes he saw while riding the bike at the gym, a breakfast bake with toast cubes, sausage and aged white cheddar cheese, recipes from Bobby Flay's throwdown and I nothing is ever ready just out of the box he spices up french onion soup, and has even tweaked his moms recipes for squares. I try to stay out of his way when he is in the kitchen because he loves it so much and I would rather do something else or just watch him cook and then enjoy the final product.

Last Thanksgiving Pat and I nearly had an all out battle over how to make an apple pie. He had no recipe and no experience but that wasn't going to stop him. I had made a few pies in the past but if there was one thing I knew it was that my mom makes the worlds best pies and he wasn't doing it the way she would so that must mean it was wrong. My mom doesn't bake the apples before she cooks the pie and my mom would sooner die than buy a pie crust from a store. My family pastry recipe is a well guarded secret and when my Grandma was in the home news got around that she was getting loose lips and spilling the secret. My mom and aunt were upset until the realised she was telling the nurses the wrong ingredients. I am not sure if she was throwing them off on purpose or not. I had to leave the kitchen and even though he didn't make it the way my mom does it was still pretty amazing. 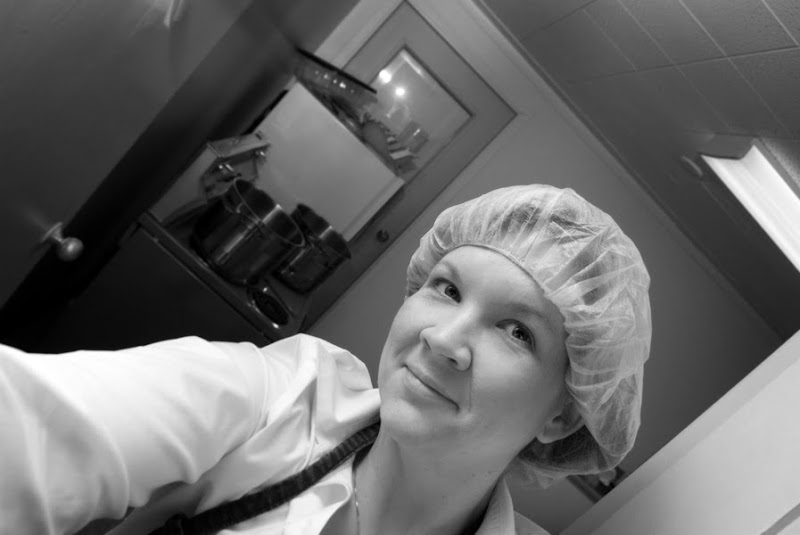 Pat even goes so far as to plan menus when we are sick around the potential that we may have to see whatever we eat for supper again later that night coming back up. This thought had never crossed my mind but Pat is a veteran puker and anyone who takes their puking seriously would never make tacos or chilli if there is a chance it is coming back up so we eat macaroni and soup. Things that are tested and true to not hurt the throat, stain the bedding or carpet and be masked by some febreeze. Now that is a guy who takes food seriously!

Have a great weekend.
Posted by Corla Rokochy at 10:50 AM

Labels: Chef Pat, corla rokochy swift current photographer, Food Friday, What to eat when you have the flu