Today is the anniversary of the happiest day of my life. I married the love of my life in fabulous Foam Lake Saskatchewan nine years ago today on a day much like today. We were surrounded by family and friends and perogies. Foam Lake is a very special place where wedding banquets are synonomous with amazing food. It was also the first time I ever saw a receiving line where the wedding party lined up after the bride groom and parents to hand out shooters to the guests. That's one way to get the party started. My conservative lawyer cousin who I adore got up to give the toast to the bride and was wearing leather pants so you know eveyone was letting loose!
Even before our wedding day Patrick was keeping secrets (good ones). My whole family knew he was going to ask me to marry him even before I did. Patrick was in Davidson for the weekend at our niece's first birthday and after we said our "Good Byes" he stuck around to ask my brother's permission to ask me to marry him. (since my Dad is gone I guess he considered my oldest brother the man of the family) He shrugged his shoulders nonchaulantly and grunted , " I guess so. She has never listened to me before so I don't know why she would start now. " Pat was touched I am sure but then my bro stuck out his hand and shook Pat's and said "congratulations and welcome to the family!" He was probably happy someone was taking me off their hands and out of town too! Pat then headed out of town and called my Mom in secret. He said for her to meet him at the Husky outside of town and to not tell me. She made up some excuse about going to show a house and snuck away. Mom figured with Pat was getting gas to go back to LeRoy and ran out of money, that he was embarrassed and had to call her to come pay for his gas that is why he didn't want me to know. When she got there she was supriesed he asked for my hand in marriage. My mom was shocked but gave him her blessing. I would have loved to be there to see the hug scene that followed as Pat and his family are big huggers and my mom has a severe hugging alergy. (don't worry she carries and epi pen)

So for two weeks before the big day of the proposal I had no idea. I wish someone would have given me a heads up. He asked me to marry him at our cabin in Fishing Lake at his parent's 50th birthdays in front of about 50 people. If I had known I may have brushed my hair and put on something other than a sweatshirt for the occasion.

Even on our Wedding day Pat was keeping me in the dark with mysterious plans and secrets. Most grooms don't really want to have that much input into wedding planning they just say, "tell me what time and what to wear and I will be there." Not my Patty. We had a battle over picking the place settings when we registered for wedding gifts (he won). And for the day of the wedding he picked our first song. When the DJ called me to make arrangements and asked about the first dance I told him, "You will have to talk to my fiance." Pat had chosen our first dance song and wanted it to be a suprise. It was a by West Life and was called "Swear it Again". The real suprise was I had never heard the song before! It is a beautiful song and I love the lyrics and it meant a lot that Pat picked it out and that made it so special.


Sometimes after the wedding the romance fizzles when kids come along and life gets busy. Pat and I were determined not to put eachother on the back burner so every year we take turns planning something special for our anniversary. We have been to Calgary, Lake Louise, Moose Jaw, Greek Nite. We have gone on scavenger hunts, arranged babysitters for suprise massages just to name a few. Last year however I hit the Anniversary jackpot when I gave birth to our beautiful miracle baby Ellie. I told Pat to try to top that for an anniversary present and it looks like he is going to put in a good effort. I have been trying to figure out what is going on for a week I asked him how I should prepare for the day and he gave me no clues and left for work. He returned home ten minutes later with a coffee muffins and a note....... Mysterious man I have. I am excited about the day to come! 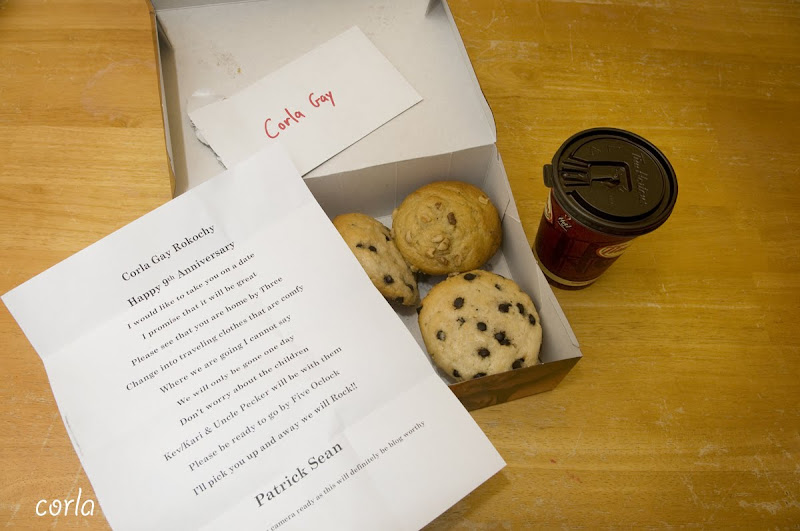 Here are some shots from Ellie's party. We had to take a few shots for the album so Ellie knows we put in some effort. Uncle Pecker was Ellie's one special little friend. Olivia made a card and got a toy out of the basement and put it in a gift bag. Brilliant that is what we should do every year. Ellie loved it. 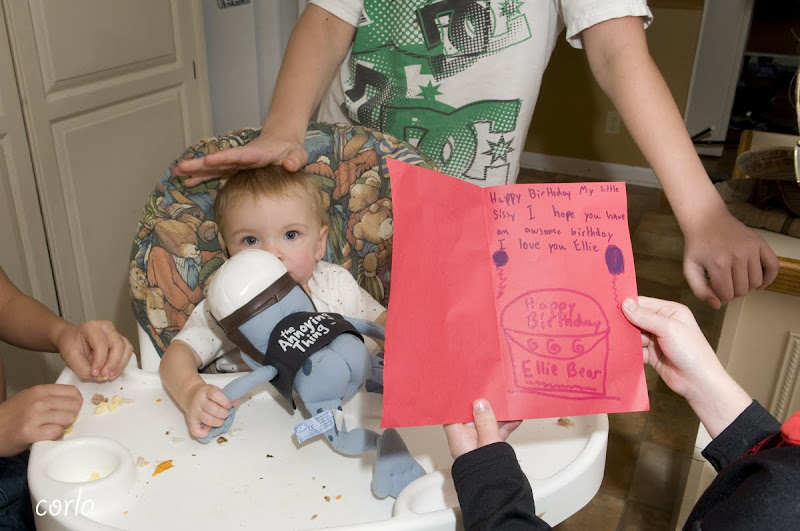 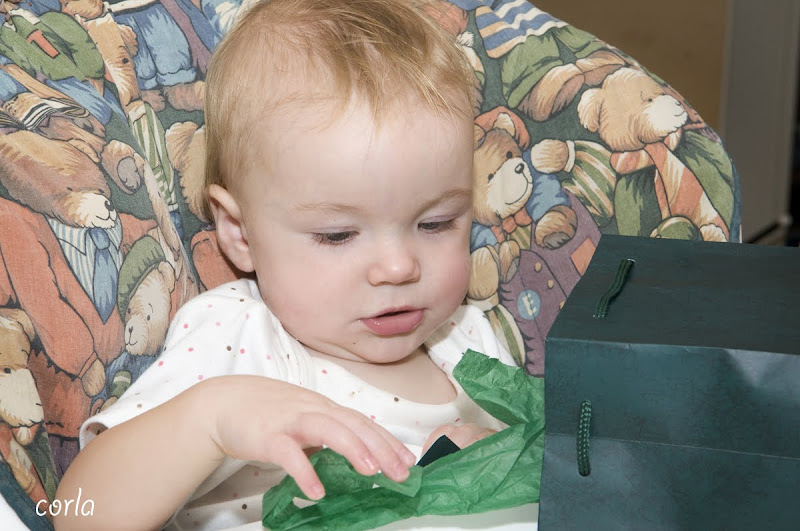 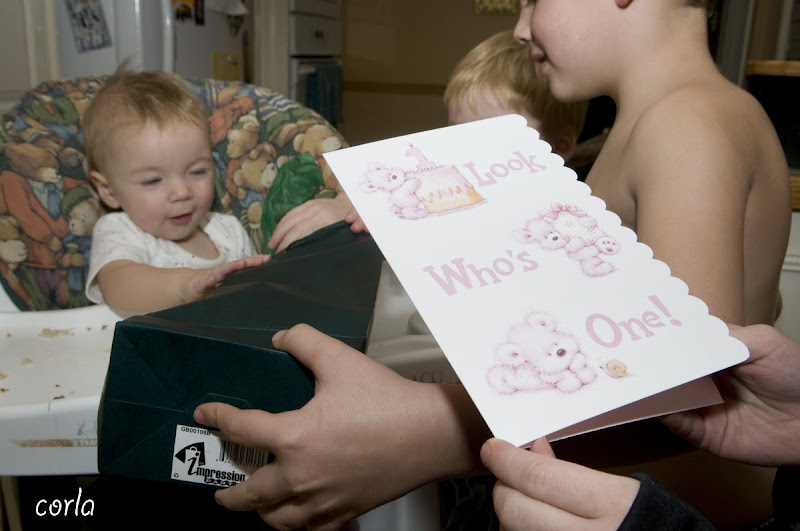 Uncle Pecker gave Ellie a real present. So cute! Ellie got one other real present from her sweet cousin in Foam Lake who just so happens to share the same birthday as Ellie! She sewed a quilted pillow for Ellie. She is so excited to have a birthday twin. 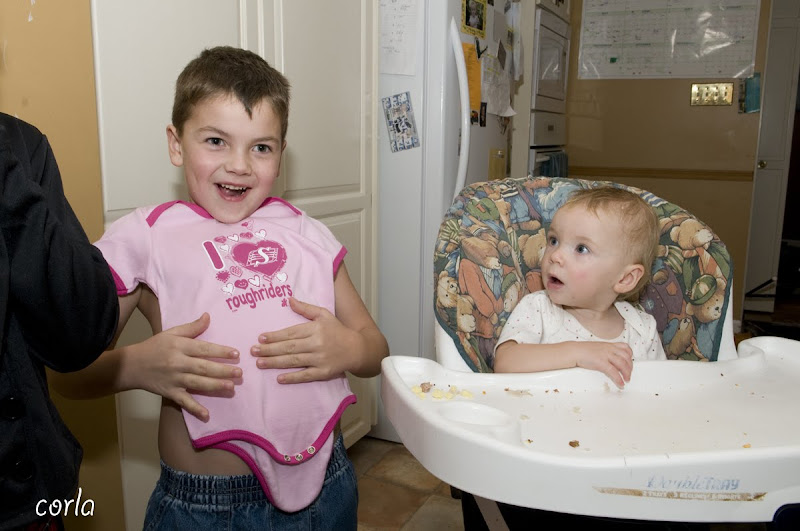 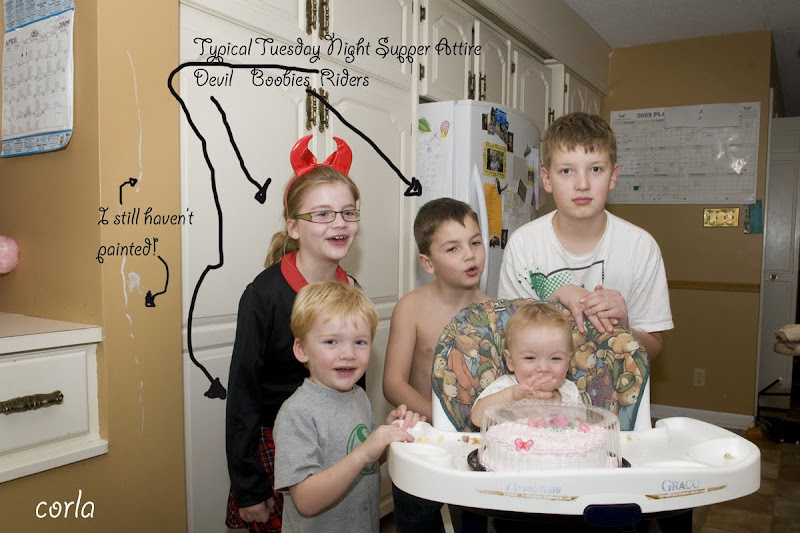 I left the cake in the container because I wanted to do Ellie's first birthday photo shoot with a cake so no one got a piece. That didn't go over so well with the siblings! 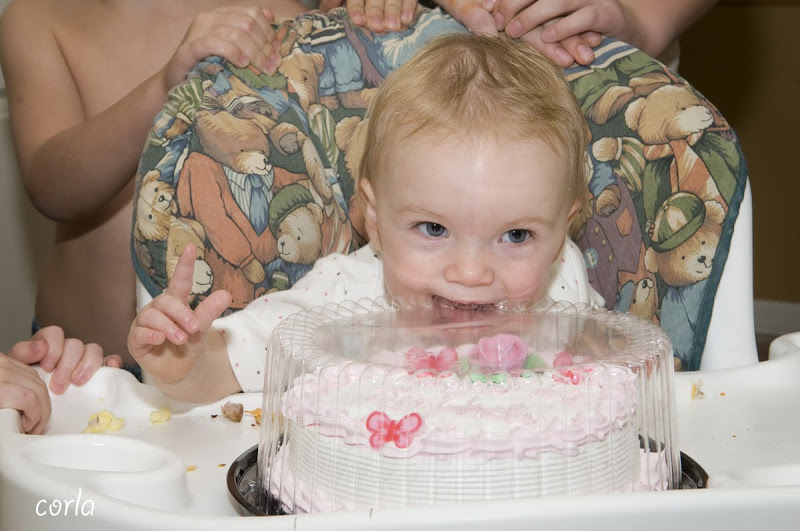 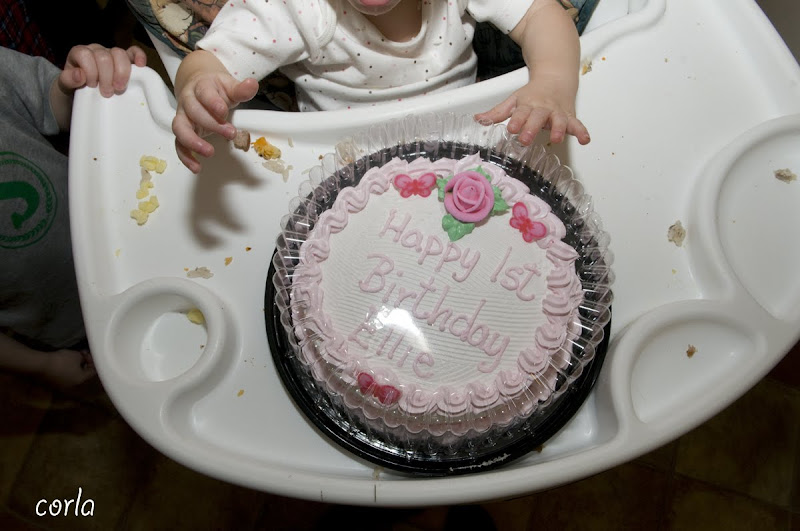 Posted by Corla Rokochy at 7:35 AM