This weekend was a girl's road trip to Foam Lake for a Breast Friends fundraiser for breast cancer patients in Mexico and for the Look Good Feel better campaign. (stay tuned for a full report)
On the way through Olivia and I stopped in Regina to cheer on Miss K who is a second year player for the U of R Cougar Women's Soccer team! On the way there I was practicing my post game motivational speech about how sitting on the bench builds character. I played volleyball at U of R the four years I went and spent so much time on the bench taking stats or at the end of the bench warming up to go in and then the coach would say, "Hey Corla you can sit back down." My friends and family knew if they wanted to see me in action they had better be there early. I was the only athlete that had the crowd cheering in warm up!
I was going to tell Miss K that sitting on the bench builds character and playing University sports looks good on your resume whether you were a starter or not. I was also prepared to tell her that it doesn't matter if you win the game as long as you put your heart into it. In the four years I was at school our conference only included U of M and U of W. They were #1 and #2 in the country. In the four years our team never won a single match in regular season play.
Alas all the preparation for the pep talk was in vain. Miss K played the entire second half of the game we watched and her Coach picked her to be the "Extreme Pita Player of the Game." The Cougars also won one of the two matches this weekend. Her mom made a bag of treats for Olivia and I and I passed my camera off to her Dad so I could kick back and cheer for good old #9. We won some t shirts and I even ran into one of my professors from 20 years ago. It takes a lot of dedication to play University Sports and keep up a good average at the same time! I couldn't be more proud. Hurray Hurray for Miss K! You do Swift Current Proud little lady.
The Coach cheering the girls on... 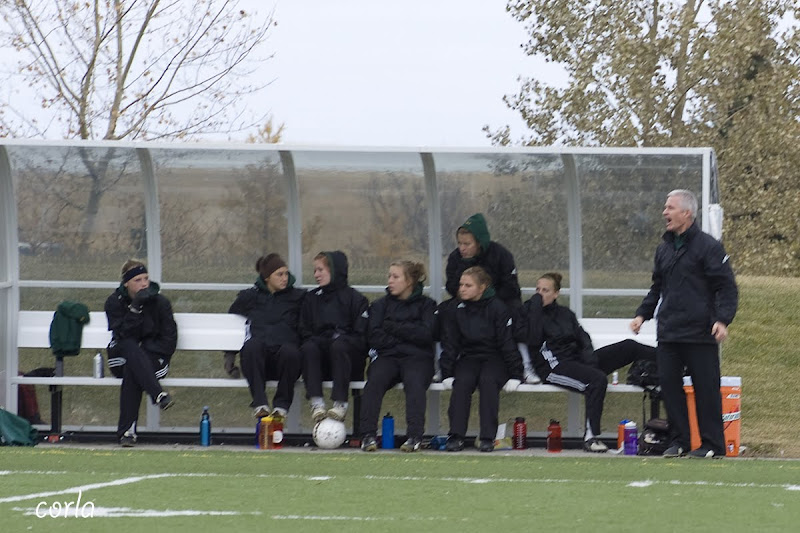 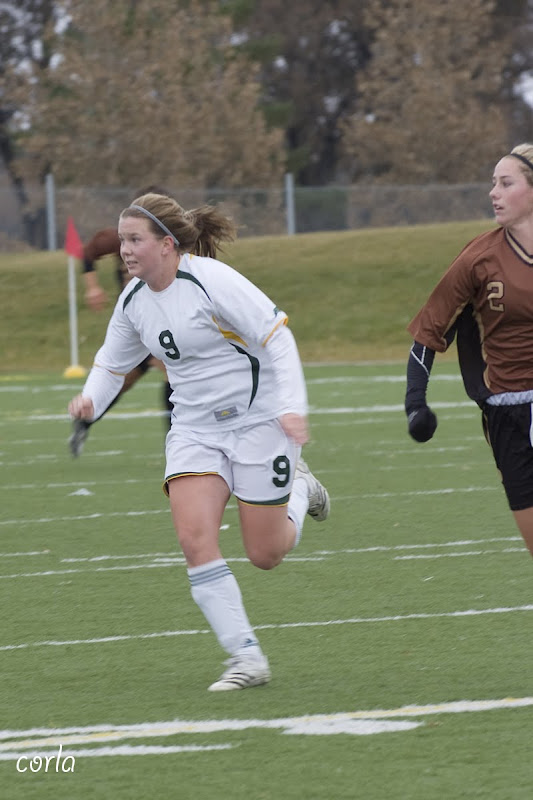 So excited to be there! 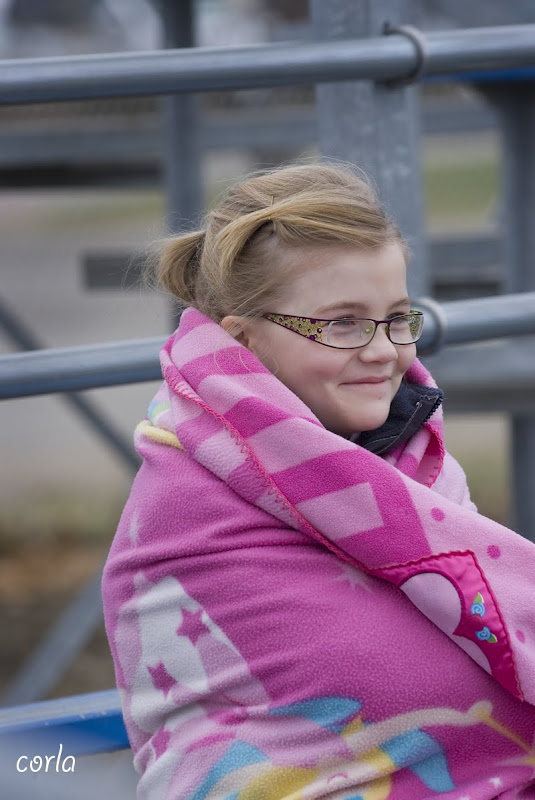 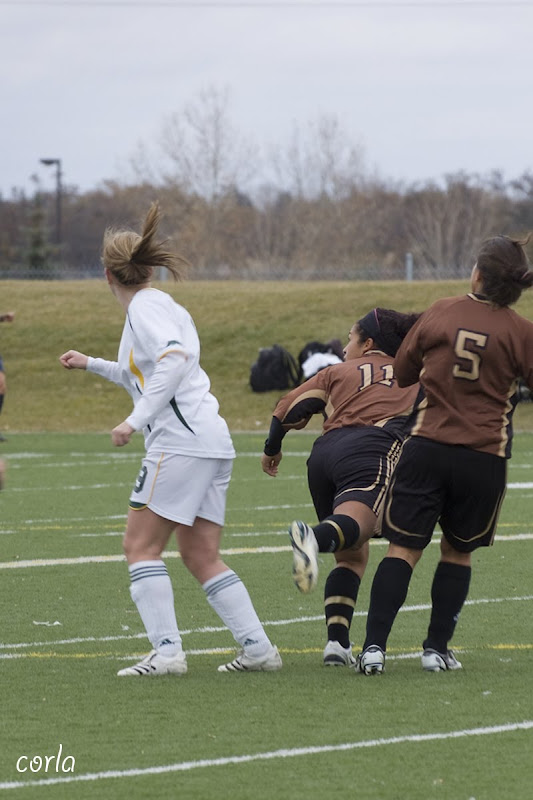 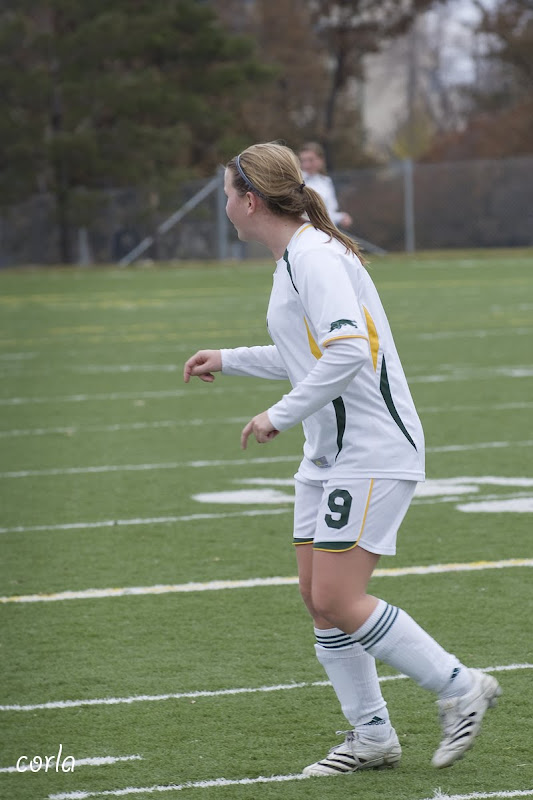 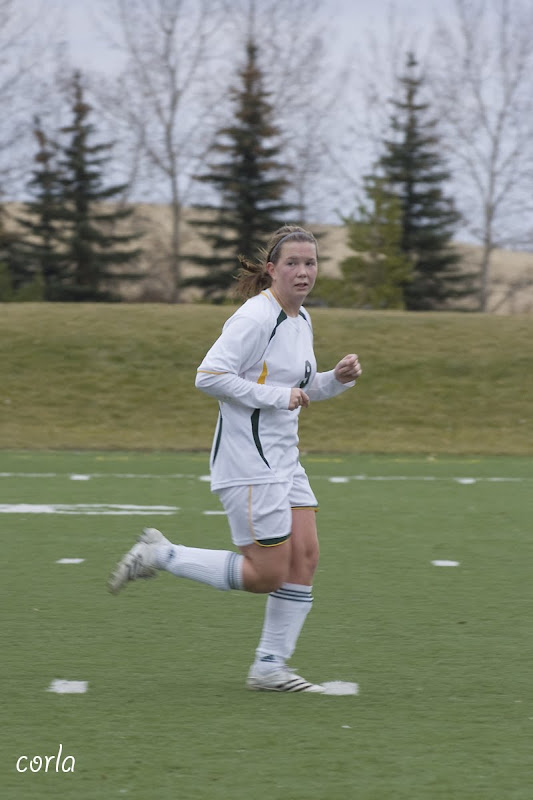 Look out she is right behind you! 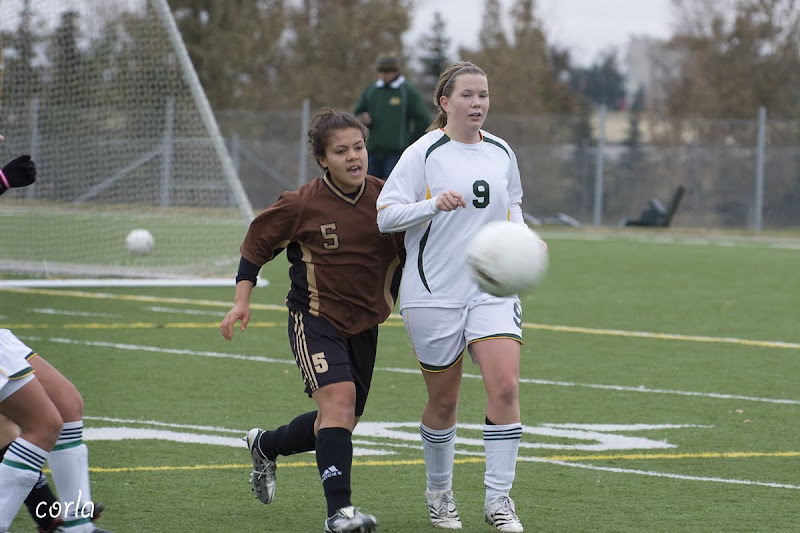 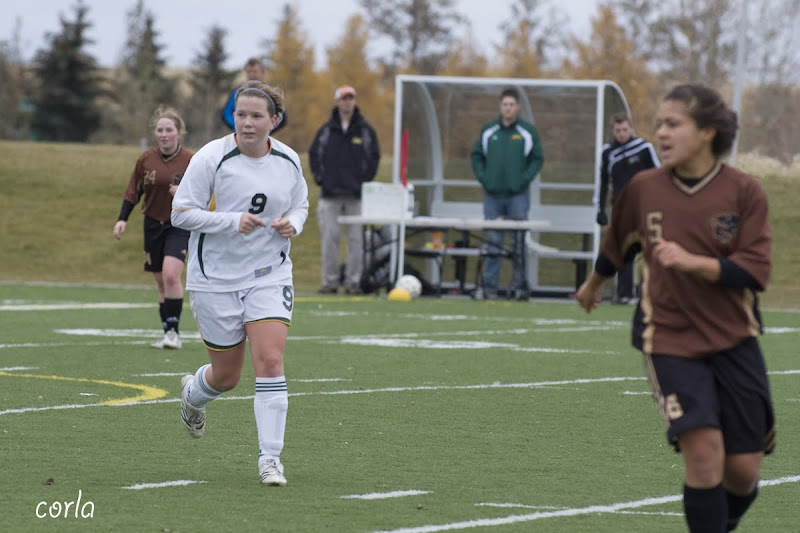 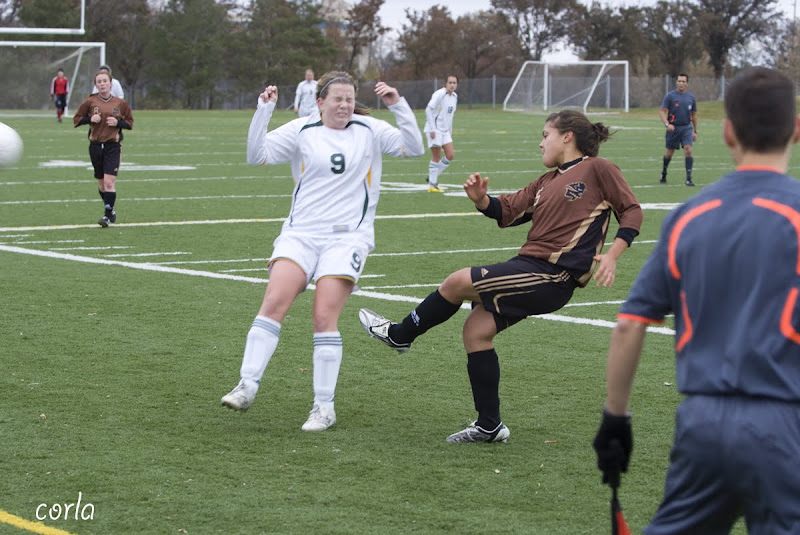 This one is worth zooming in "Tyra" close. Is that a "Smize" you are doing for the camera? 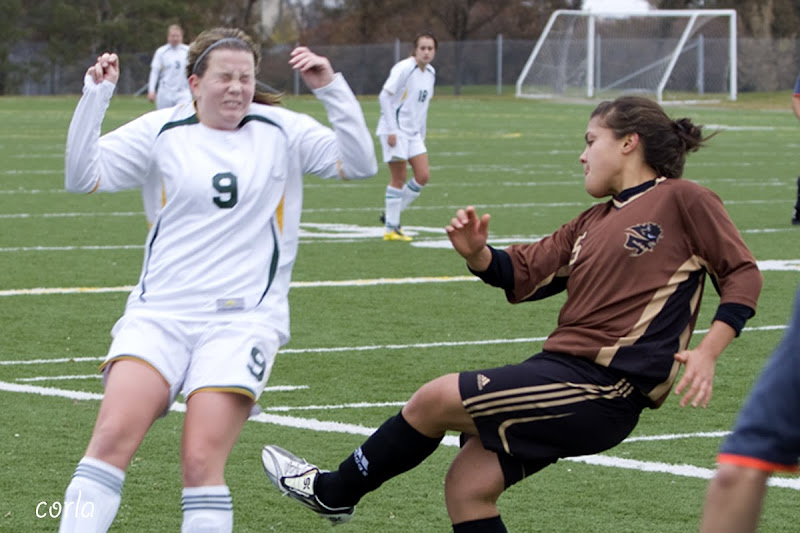 Some love for the fans! 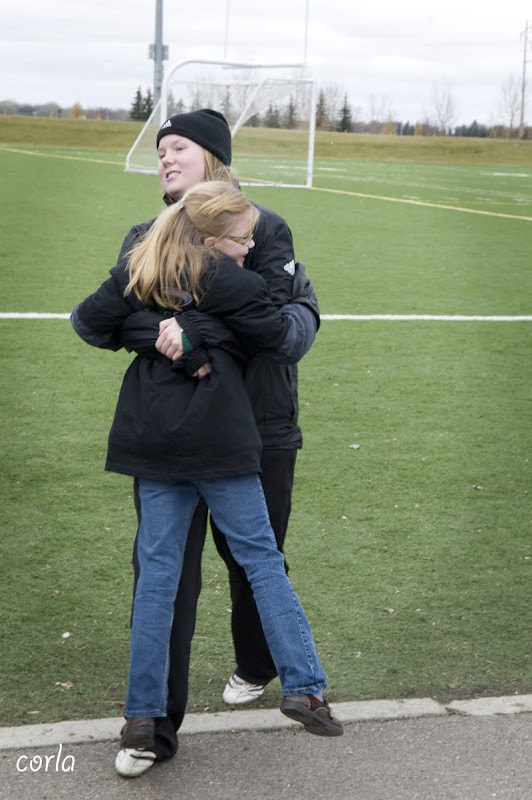 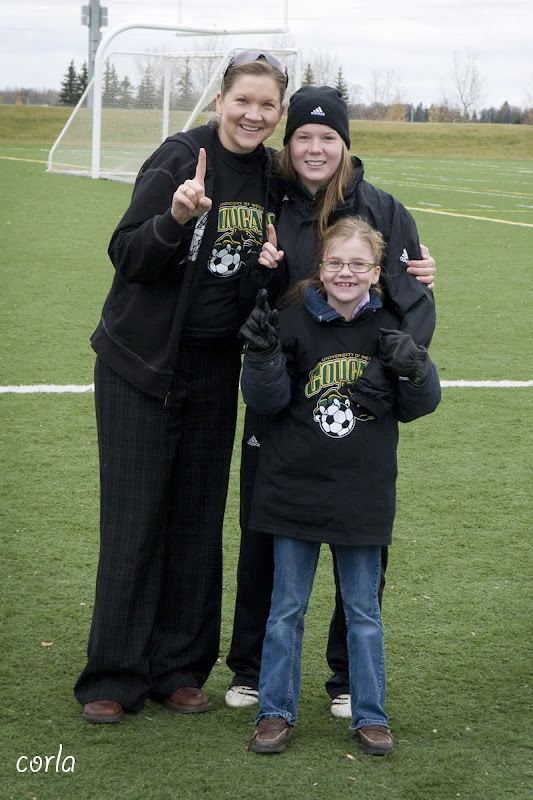 And finally what kind of blog post would this be without a super embarrasing picture of me? Here I am at the peak of my volleyball career. Green bun huggers and all. Do you see the crowd in the background! Yeah those were the days. ( I hope this post wasn't to much like Madonna talking about Michael Jackson. ( Miss K goes to U of R so did I..... Miss K lives in Res so did I ....Miss K is in education.... So was I. Miss K is a cougar...so was I. ) 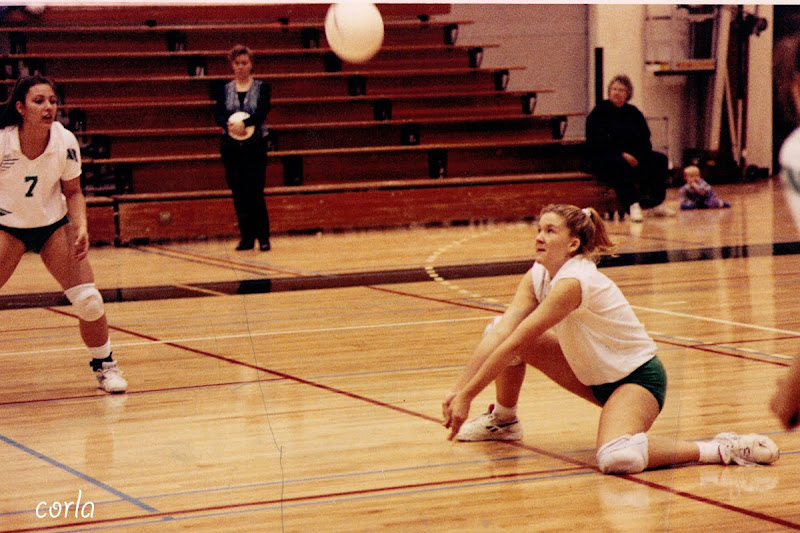 Posted by Corla Rokochy at 7:30 PM

Labels: Cougars, soccer, U of R