Radiothon for a Digital Mamography Unit

Here is a bit of advice from an old pro. Never I repeat never brag that your baby is sleeping through the night. When other moms lament their woes of kids up in the night just nod your head sympathetically. Don't offer advice and don't say that your baby has been sleeping ten hours a night since the minute they came home. Other moms will hate you if you do that, they will smile and say good for you, what a lucky mom you are but deep down they will hate you and your ten long hours of sleep.

Just when I thought I was home free because Ellie had slept through the night for the last month she proved me wrong and work up at midnight, three and six. Of course, on the one morning I had to wake up early she decided not to sleep. First I tried to ignore her and then I went and brought her to our bed for a cuddle. It was like sleeping next to a man in the middle of the night. There was whinning and crying, I tried a cuddle or to pretend I was asleep but in the end I had to give in as all the complaining and tugging at my shirt just told me lift your shirt up and get it over with so we can all get some sleep.
A little milk did the trick and speaking of boobies I was off to the Dr Noble Irwin Radiothon to raise money for a digital mamorgraphy unit this morning to donat $2 500.00 (over 10% of the cost of the entire unit!) on behalf of the Breast Friends Cookbook group. The group is made up of 10 amazing women from Foam Lake one of which is my mother in law. I was so proud to be donating on their behalf and share the story of how they have raised nearly a million dollars to give back to cancer causes in Saskatchewan.
I also think I have found my calling. Being on the radio means you get paid to talk and no one cares what you look like. You can sound perky and fun even if you have 20 or 30 pounds to lose, your hair is a disaster, you are wearing black winter shoes your husband's hoodie with your brown yoga capris which lets face it have never been used for yoga a day in their life. When they were leaving the store the day I bought them they were so full of life and expectations and they have been reduced to pants worn to clean the house and to make sure you can eat as much as possible at an all you can eat buffet. The whole getting up early in the morning thing may be reason enough to stick with my current occupation as I staggered out of bed brushed my teeth with a tube of diaper cream and just wore my breast friends tshirt that I was wearing as a nightie and headed out the door only to realize that I forgot my camera so I will be trying to spruce myself up and head back later in the day for a posed photoshoot! I will share that with you later. Have a great weekend. 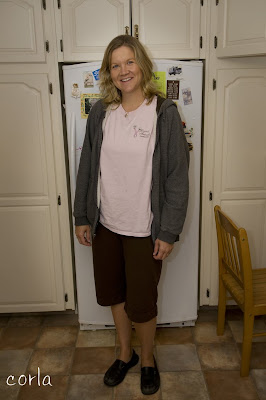 hahaha.. good point on the yoga pants that have never been used for yoga.. i also like to refer to my yoga pants as my 'fat pants'

I too have the yoga pants that I tend to use when I am dusting knick knacks around the house such as my Wii Fit which I believe I purchased around the same time :)

when you are a busy mom "comfort is priority #1" {i remember} oh and by the way YOGA PANTS ROCK! I wear my all the time when I am out shopping or at home cooking, you name it! Have a great weekend!