It's Monday so here is a little this and that. Here is the winner of my reader entry if you would like a chance to win next Monday for a free sitting and 8x10 send your funny story and/or picture to corla_rokochy@hotmail.com
As I was trying to get ready to go out one night I left my then almost 2 year old daughter to play in my room while I was fixing myself in the en suite bathroom. After several minutes of primping myself I realized it was pretty quite in my room. A good indication that Summer-Dawn was up to know good. Little did I know that she too thought she needed to get beautiful and she found the perfect necklace… Check it out! 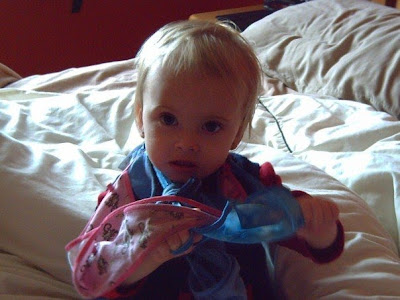 Yes those are my underwear she is wearing as necklaces. I simply got a “mom I petty!” (her word for pretty)
My daughter is now 4 years old and I still watch my underwear drawer!

Thanks Brandy! Such a cute story and a cute daughter. If my kids went in my underwear drawer it would be a giant white tent not a cute little necklace like that!

Have you seen the advertisement for the Cadbury chocolate bar with the crazy eyebrows. I saw it for the first time at the gym. I love watching chocolate bar commercials while I am on the treadmill. Anyway I thought since it was filmed at a photography studio it would be perfect for our first Circus House Video Production. Olivia just got glasses so that was a good showcase for her. Kelsey just got a watch for his birthday that he is in love with. This summer her wore our friend Neil's (I am not actually allowed to mention his name on my blog but I am a rebel) watch at the cabin he didn't want to take it off....except to shower. He came out to the kitchen where we were eating supper completely naked except for the watch and he was covering his unmentionables with his hand. He had his hand with the watch covering his boys and came out asking, "Can someone take this watch off?"

This was our first "Circus House Video Production"Levi was the techie, Miss K was the videographer Carson was the understudy for the male lead and I played the role of the fashionable grey clad photographer. You can play them both at the same time and it is kind of fun. The kids were thrilled to be on you tube!

Here is one from the Blooper files. Carson is playing the part of the eyebrow boy and kept looking at the watch so the kids were yelling at him. He kept his cool though and is so cute!

Posted by Corla Rokochy at 7:31 AM