I used to consider myself somewhat crafty.  I  cross stiched, quilted, painted, made the occasional popsicle God's eye but lately I have been to busy creating people to create many crafty projects.  So you may be surprised to see a post about what to do with glue but don't worry there is no glitter in sight.

Monday was a day off from School which means a whole day of, I'm bored, all we ever do is clean, I had it first, he's bugging me, I'm hungry, Mom why are you crying...  if you are a parent of school aged children you can relate to the PD Day anxiety.  Well yesterday we broke from the boring old routine and took a field trip not once but TWICE to the E.R. for stitches!

First was Carson.  Kelsey and Carson love to wrestle.  When I ask them not to they say, " We aren't wrestling we are playing bull rider at the rodeo" (ok even I like that game but that's beside the point) or that it's ok I'm not hurting him, he wants me to.  Well today it was, we aren't wrestling we are pillow fighting.  Well I think they were using the pillows from Halloween filled with pop and candy because, BOOOOM Carson was bleeding.  Well luckily no stitches just GLUE!

Something about Carson, Halloween and stitches.  Below is a picture of Carson when he was 2 and his 2 day old sister.  We just were discharged and then we were back again to get stitches.  It looked great with his Skeleton costume.  Kari came to the rescue running over to take care of the brand new breastfed baby!  What a great friend.

This year the cut wasn't as bad.  Just a blackberry picture as I don't know what blogging etiquette is in the E.R.  Didn't want to look to TMZ. 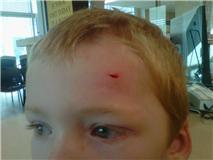 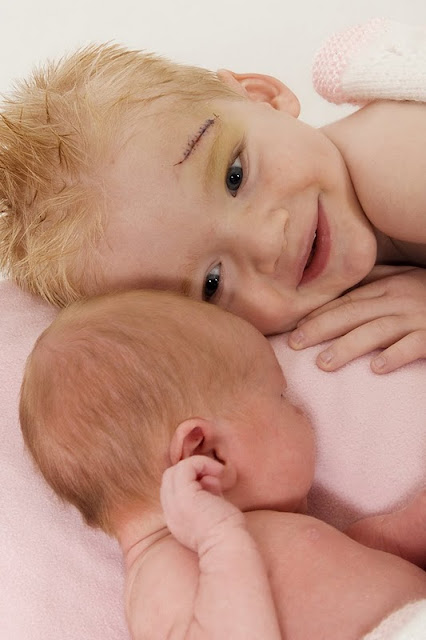 I felt pretty bad returning only 8 hours later with my second kid in need of a good gluing.  Olivia smacked her neck on the swimming pool wall.  The nurse wrote down that she hit it on a pole and they kept asking her about hitting the pole and falling off the pole!  Pool  Poool I said,  No daughter of mine is going to be on a pole! 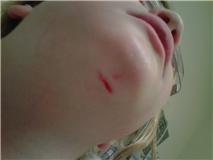 The Doctors, Nurses and staff were as always incredible.  They did drop one bottle of the skin glue on the floor and since they were all gloved up I offered to grab it and throw it in the garbage.  I have to admit for a minute I did think about throwing that bottle in my "Let's Make a Deal Purse".  Just to have in case for the next PD Day either to glue together cuts or possibly glue some mouths closed or maybe my ears closed...........
Posted by Corla Rokochy at 3:51 PM