Canada- Land of the Ketchup Chip

This week much of Canada was disappointed to lose out in the Gold Medal Match of the World Junior Game here in Saskatoon, Saskatchewan. To lose on home ice to our arch rivals the neighboring USA team was hard to take. But dispair not Canadaians let's remember how lucky we are. Sure the U.S.A. may have a gold medal and we do not but let's take a moment to reflect on all of the things that we have and they don't. 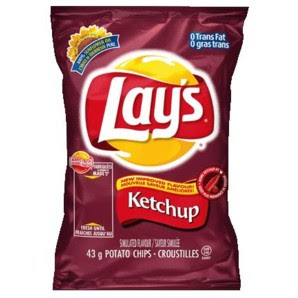 Ketchup Chips- a staple in every little boy's diet
Dill Pickle Chips
Smarties- American smarties are rolls of candy like our rockets
Shreddies
Areobars
Tim Horton's coffee (at least not one in every city)
Big Turk
Goodie Rings
Poutine-Fries, gravy and cheese, how could you go wrong?
E. D. Smith jams
oh Yeah and Universal Health Care and 12 months of maternity/paternity leave (but that pales in comparison to the chips)

"Also note that our beer is better and Canadian girls are prettier. :)"

Thanks Ryan, I hope the girls aren't prettier just because of all the beer.

Feel free to add your own!

"Football- where you don't get to waste a down and we have bigger balls."
Neil had the following additional comments about good old Canada and why it is unique. Thanks Neil
The loonie - because our dollar coin has a uniquely Canadian bird on it
The twoonie - because our dollar coin has a uniquely Canadian bird on it???!!!
Maynard's Wine Gum - We live in a country that still has very little laws against giving your kids booze candy
Clam Juice - Gross
Maple Syrup - Delicious
Caribou - The weirdest looking horned beast you have ever seen - They can fly as well
Molson Canadian - Because if it was Molson American it would not only sound dumb
Alanis Morrisette - She does bad things in theaters
The Barenaked Ladies - Due to our weak NAFTA laws the U.S.A is more than welcome to take this team of inept "musicians"
The Tragically Hip - The best band that ever lived....period
Kim Mitchell - Might as well go for a soda...nobody hurts...nobody dies....
Rush - The Naked Ladies comments
The Montreal Canadians - Owned by rich Americans, loaded with rich Russians for the entertainment Canadians
Gordie Howe, Wayne Gretzky and Steve Yzerman - Taste it USA
Lorne Michaels - Created SNL and is a proud Canuck
Bob and Doug McKenzie - take off eh! Yah hoser.
The Marijuana Party - and they actually receive votes
The Canada Goose - Majestic and timeless beauty... delicious
Crips and Bloods - nope not here don't even think of bringing that crap here
Canadian Tire
Posted by Corla Rokochy at 10:32 AM

Of course we also have good host iced tea not just cold tea like my granny drinks!