Summer is Slip Sliding away!

This weekend the weather was beautiful!  And what do you do with restless kids on a sunny Sunday?  Let them slip and slide.  This bad boy was on sale for the end of the season and like most things at the Circus House it was used, enjoyed, and destroyed.  Pat nearly had a coronary trying to get the T rex to stand up straight and finally improvised a brilliant "Dadgyver" solution of bochee balls in a garbage bag.

Our next door neighbor asked what was wrong with the hose and some plastic but what fun would that be?  Pat wanted to make sure the kids had a fun fabulous summer day.  Mission Accomplished.

I positioned myself just out of reach of the water and played around with action shots.  This is a great way to try out action shots of your own.  With the action coming towards you there will be less blur. 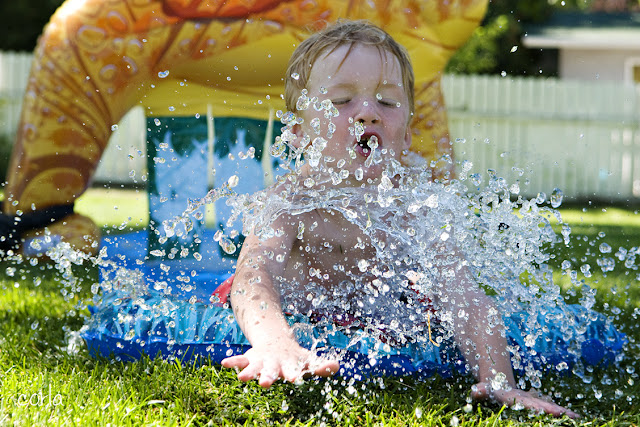 Ellie made it quite easy for me on this one crawling down the slip and slide. 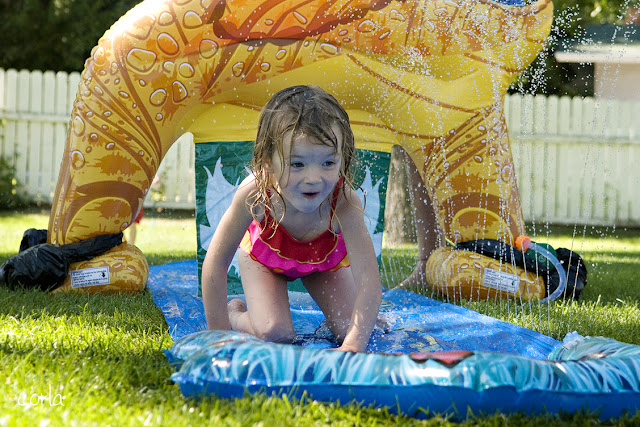 Olivia goes full force, while Dad sits in the background and enjoys watching the kids play.  Most of these shots were taken at an ISO of 800 the shutter speed was 1/1000.  This is a fast shutter speed which is what makes the drops of water so crisp and clear.  Because the shutter opens and closes so quickly, not letting as much light in you have to go to a higher or more light sensitive ISO and/or a smaller aperture setting.  These are 2.8-4.5 .  That is why Pat is so out of focus in the background. 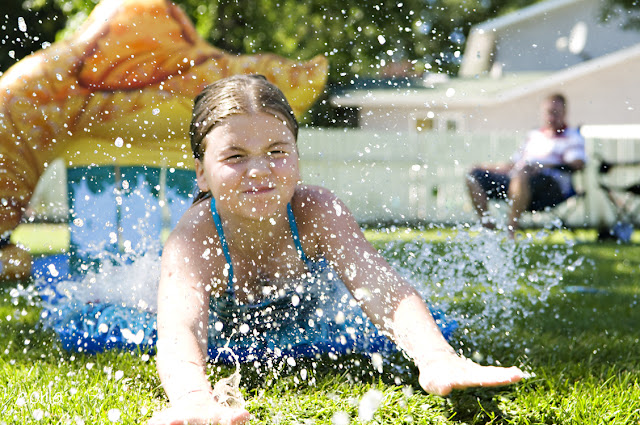 Fearless Kels. In photoshop you can create your own actions.  I have an action that sharpens and slightly lightens the center of the image and then slightly darkens and blurs the outside of the image.  This brings focus into the subject.  It is a type of vignette.  You should really, really try to avoid a heavy black or white vignette on your image.  I always make a separate action for a horizontal or vertical image. 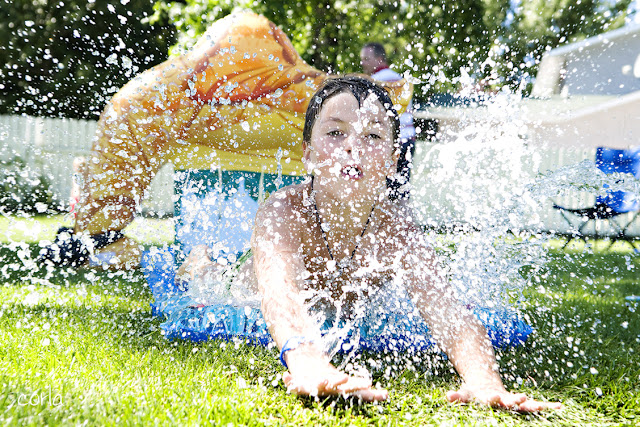 Here is the original SOOC (straight out of the camera).  I punched the color up by making a new layer and then changing the blending mode from "Normal" to "Soft Light".  Then of the soft light layer I lowered the opacity way down to 20%.  All of these things you can create as an action for yourself to save you time if you do the same thing over and over to your pictures.  Then you can do a large number of step quickly to one image or to a whole folder.  Like when I put my name on the bottom corner. 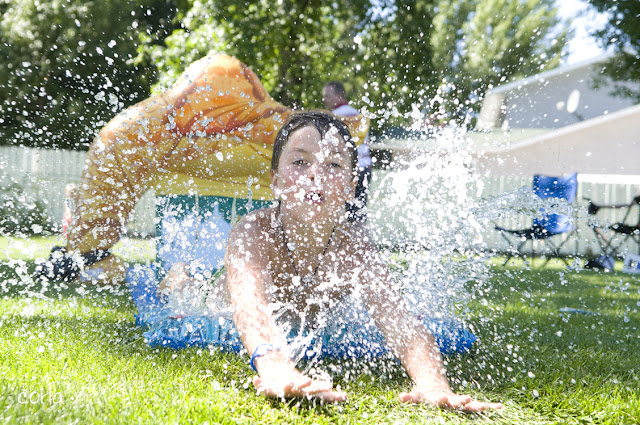 Dad decided Ellie was too slow and needed his help. 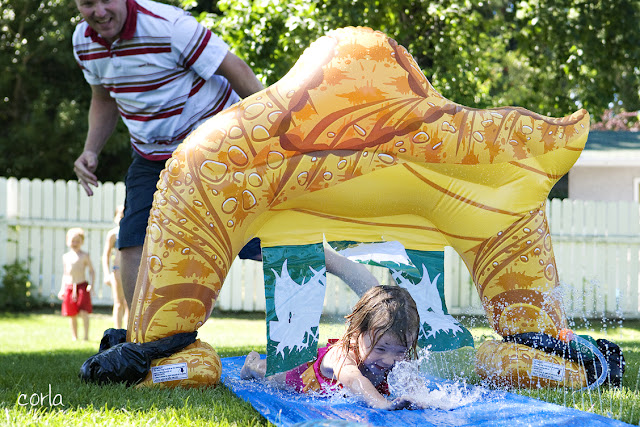 She wasn't a fan of the sped up version of the slide. 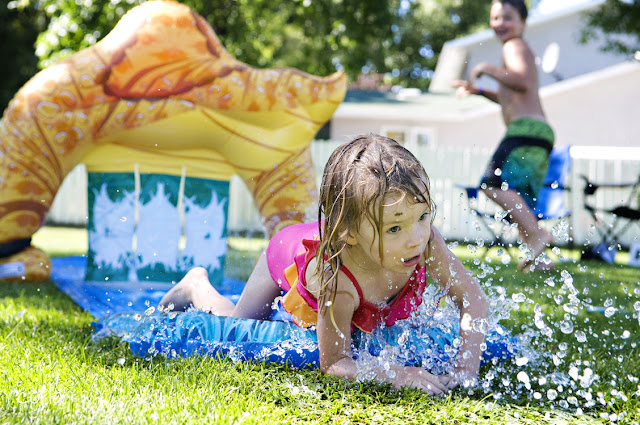 That's it I quit. 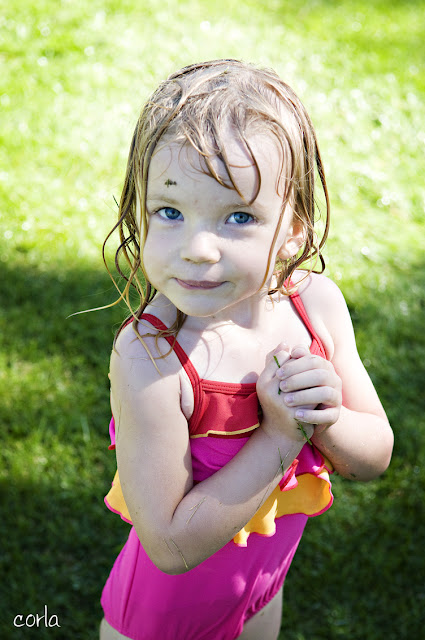 The goal is to wear them out so they are in bed before us but the more times they ran the farther they went! 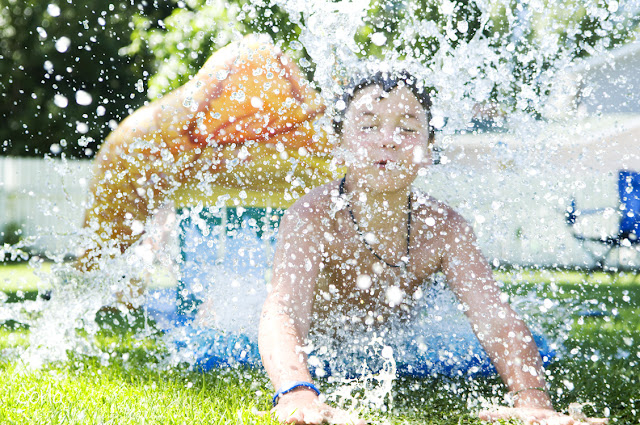 Eventually clearing the entire thing and ending up skidding on the grass. 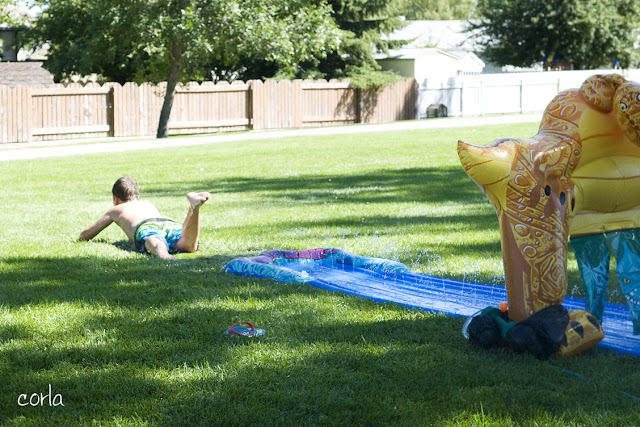 Our neighborhood daredevil that just happened to be biking by.  You didn't have to ask him twice to join in! 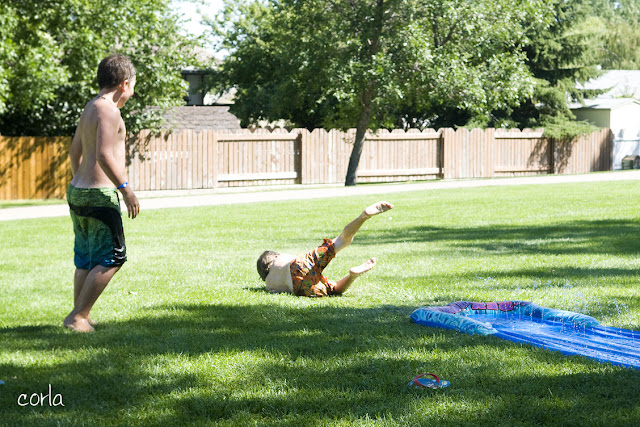 It was the best money we have spent in a long time!  The kids had 2 full days of fun and exercise, the grass got watered and they even cleaned it all up!  Thanks Dad!
Posted by Corla Rokochy at 1:09 AM