It was a newsworthy week in Swift Current.  Here are some of the events that shaped our week.

Last Monday there was an armed robbery at a bank in Swift Current .  It happened at 9:40am two doors down from where I stopped for coffee at 9:20am that day.  A man was arrested today in MooseJaw for that robbery and a similar robbery in MooseJaw.  When I heard the description of the suspect I wondered if he was embarrassed by how he was described "male suspect, between 20-35 skinny and 6 feet tall with acne on his nose".  I am very glad they caught him and that no one was hurt.  It made me wonder how an eye witness would describe me if the need every arose.  I think it would be something like this, "tall, sturdy set fourtyish lady looking very frazzled, bags under her eyes, hair dishelved and twisted up into a crazy looking bun, sweats, oversized shoes that look to be mens', oh yeah and a scarf around her neck that didn't match any of her outfit"......

On Wednesday we had a classic Circus house moment. It reminded me of the eclair Seinfeld episode.  Our house can be a little hectic between after school and supper time.  We were all crowded into the kitchen.  Pat was cooking, I was putting together Carson's dance bag when the phone rang, it was Subway asking Levi to work.  We had 10 minutes and one boy who needed to be at dance class and to who had to get to work.  They both needed to eat quickly so Superdad Pat whipped up two roast beef buns.  Carson ate two bites at the table when I told him to come put his boots on.  I meant walk and eat the bun, he thought I meant throw it in the garbage.  I was a little mad as someone would have eaten the rest.

In the midst of the chaos in the kitchen no one noticed how Ellie ended up with half of what I thought was Levi's bun.  I "borrowed" a bite of her bun which she willingly shared, then Levi "borrowed" a bite from her.  Then Pat said, "where did Ellie get that bun from."  I replied for her, "she is eating the rest of Levi's" as I thought he had given her half of his bun, to which Levi replied, "No, I finished all mine!"  Levi, Pat and I all realized at the same time that while everyone was hustling around Ellie helped herself to Carson's garbage bun.  And Levi and I had wolfed down half of it!  Ewwww.

This is my first blog reenactment.  I need to see a picture to really appreciate the story!  This was Ellie perched in her usual spot just watching everyone bustling around eating half a garbage bun. 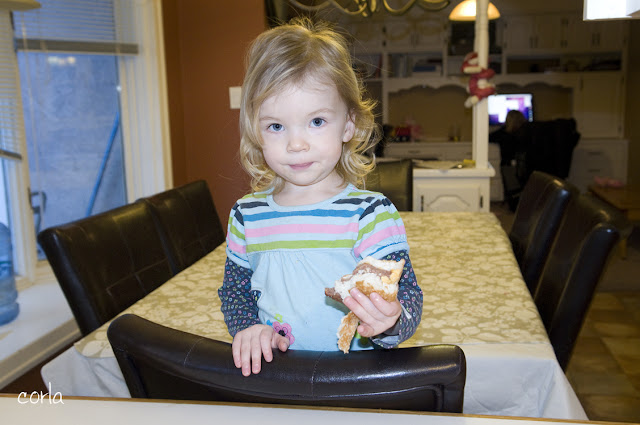 Here is where she dug it out of and Levi and I were fighting over who got the last bite.  Ellie is so nice to share. 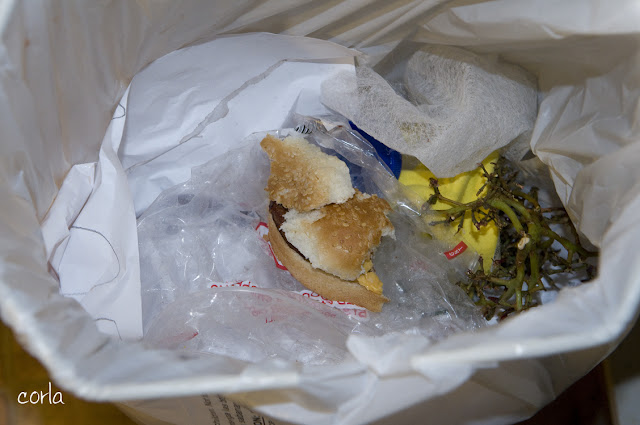 On Friday the gals and I headed out to BPs for supper and then to Yuk Yuks to watch 3 female comedians.  They were fantastic.  They were each great in their own unique way.  They entertained us and it was awesome to meet them after the show.  Lori Gibbs is still our favourite.  But we all giggled when Karen O'Keefe talked about having conversations with her girlfriends that had kids and it was like talking to someone with a split personality.  I am definitely guilty of doing that!  And when Allyson Smith talked about the creepy school photographer who did retakes in his van I burst out laughing.  It was a great evening! Here is a cel phone picture of me with the gals! For once I left the camera at home. 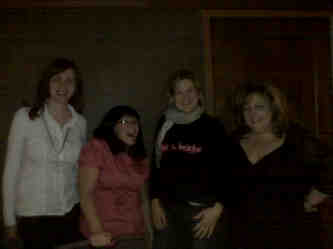 Posted by Corla Rokochy at 9:28 PM