The Last Day of Summer Holidays!

My mom always told me, "The good lord knew what he was doing when he made you pregnant for nine months." By the time the nine months is over you are so tired and miserable you just want is to be over. I would say the same thing is true for summer holidays. Today is the last day of our kid's summer holidays and it also happens to be Kelsey's sixth birthday. I decided last night that I was going to spend the day enjoying every minute of the last day before school (wrong), I wasn't going to yell (wrong), I wasn't going to do any work (wrong), and I was going to be just a ball of sunshine.

While I was giving the baby a tub a magazine phoned to ask about wedding images. Ellie was eating soap and crying. While I was chatting with a client and getting Ellie dressed upstairs, the other kids were downstairs making chocolate milk while digging through their previously neatly organized school supplies eating chocolate cake for breakfast. I guess it does have cereal and peanut butter so that counts right? (This was Pat's creation from last night when I was at ladies night golfing. Last week it was rice pudding. ) And who is the one who made the mess on the cupboard? Not me, or me and it sure wasn't me. There was a lot of finger pointing but the chocolate on the face gave it away. 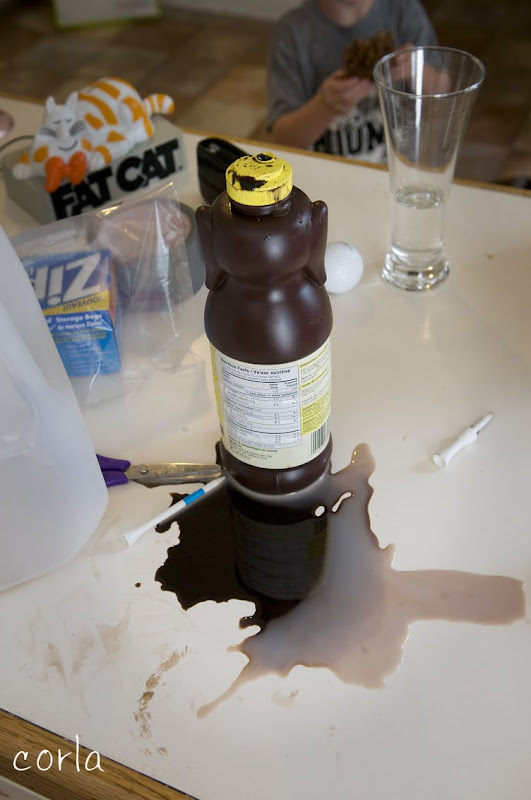 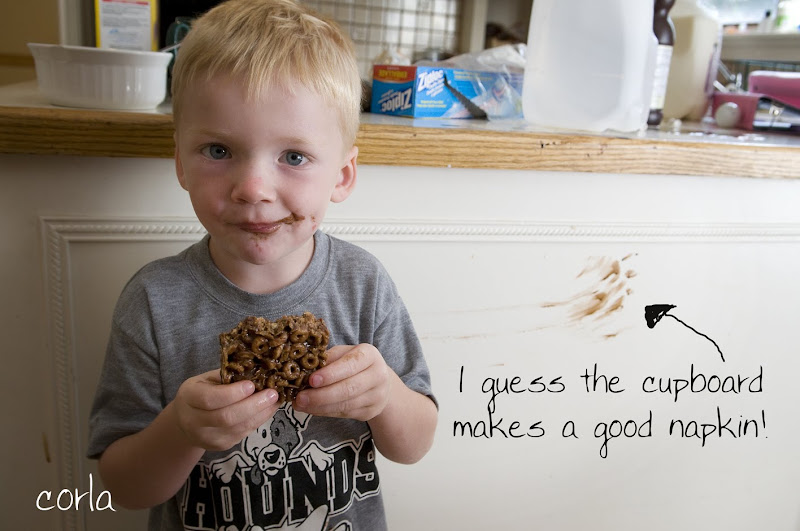 So Carson you have no idea who could have made that chocolate mess? 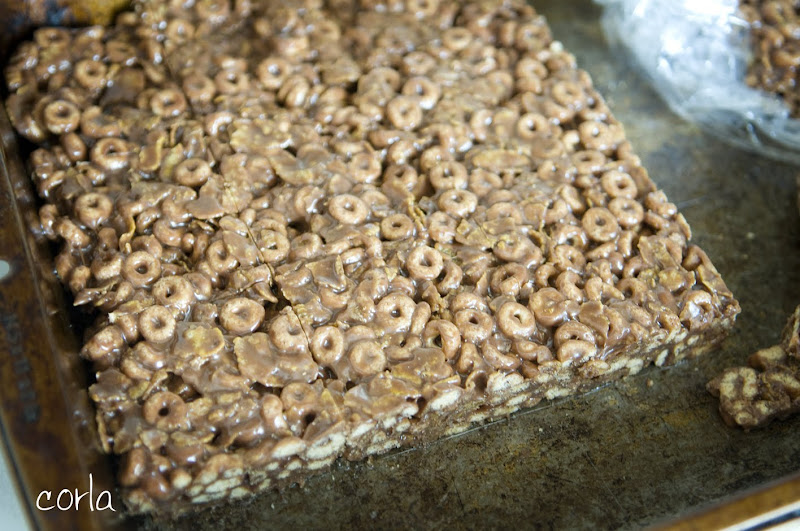 After an awesome play date with friends we headed out to do errands when I yet again took myself out of the running for mother of the year. Now before I tell you this story I know you are going to ask yourself why on earth would anyone tell a story like this? Well over the last few weeks I have had a number of moms in person or through email tell me that my stories make them smile. Somehow my incompetence and misery is funier from the outside looking in or lets people know well at least that didn't happen to me. So I can't believe I am going to tell you this but here is Pentamom confession number 286. I had errands to run and there is an age old debate. Do you drag four kids in and out of the vehicle to drop something off or do you run in and out?

Well I had four kids in the van the oldest being almost eight, the airconditioning running, the dvd playing a movie, everyone buckled in and the doors locked as I have the extra set of keys. Should be a no brainer to run in and hand an envelope across a desk right?
Well I finished my last delivery and yeah we are off to the park. I drive to the park and unload three kids when to my absolute horror one of them is missing! I look across to the park....did he slip past me? I look in his seat... I look back to the park... I look in the way back of the vehicle. Now picture yourself being one of the mothers across in the park as I start yelling at the top of my lungs to my kids crossing the street....."Do you know where Carson is? " Olivia nonchalantly calls back to me, "Oh yeah I forgot to tell you he got out at the Credit Union downtown." Got out downtown. There are three rows of seats in the vehicle and I hadn't even realized he was gone.
Then like the lady from the Ikea comercials who yells isanely for her husband to "start the car" I scream like a wild woman at my kids "Get in the car, get in the car" I was so near a heart attack I couldn't even breathe. My hands shook as I called the Credit Union and I said, "is this Mike you have to help me I think Carson is somewhere in the Credit Union."
Now you have to understand that my husband and I are two completely opposite people he is the pot and I am the lid. We couldn't get more different but we compliment eachother perfectly. He is pretty used to the crazy after 10 years of being together but I try not to take the crazy on the road and I especially try to keep the crazy out of his work. Well the phone rang and it was Pat. "May I please speak to Carson?" I breathed a sigh of relief. "Who has him" I asked. He had gone into the Credit Union and went up the elevator to the second floor to get his brother a balloon for his birthday. There he was with Pat's boss. Chalk one up for the crazy wife. They were all great and I had to go downstairs and call off the search for the two foot redhead with no shoes!!
We resumed the birthday with supper celeberations at the modern family resteraunt. It was awesome and as you can see I have a very limited wardrobe and I have worn the same shirt in the last three posts I have appeared in. 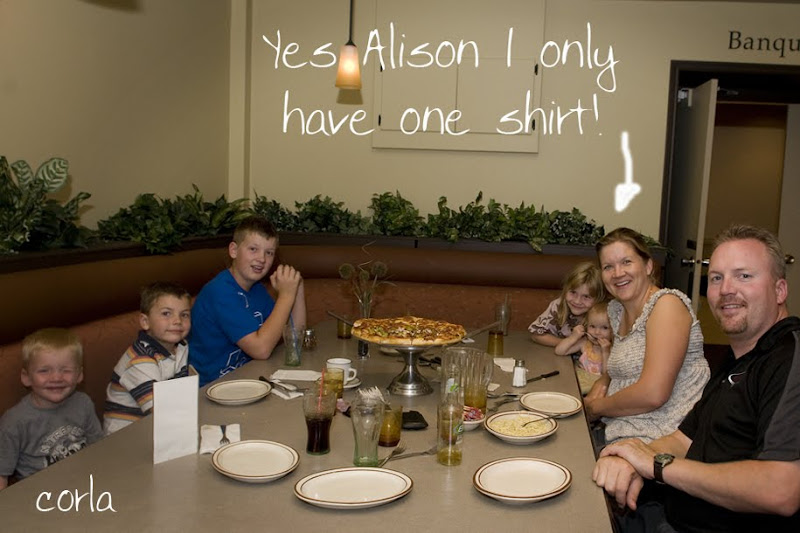 The first piece of pizza landed on the phone. 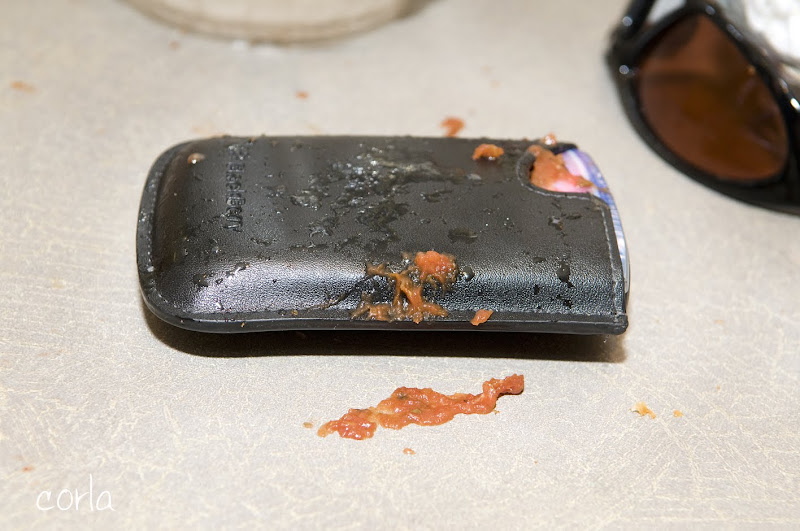 Move it along stranger danger. 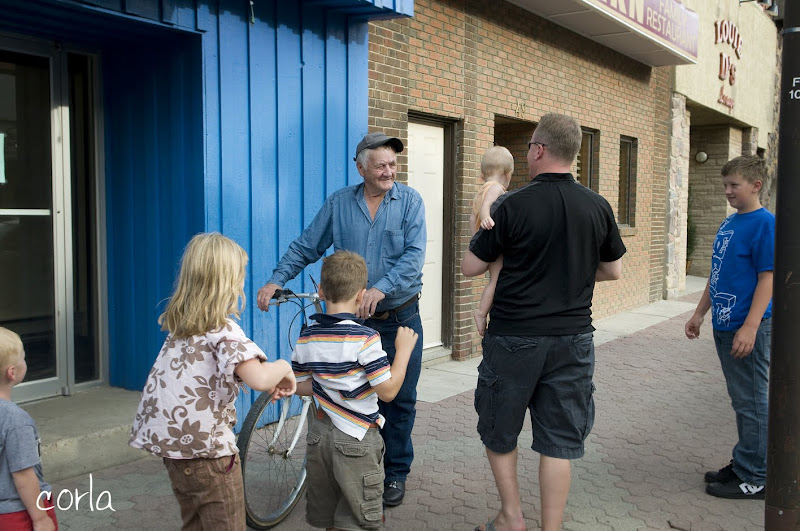 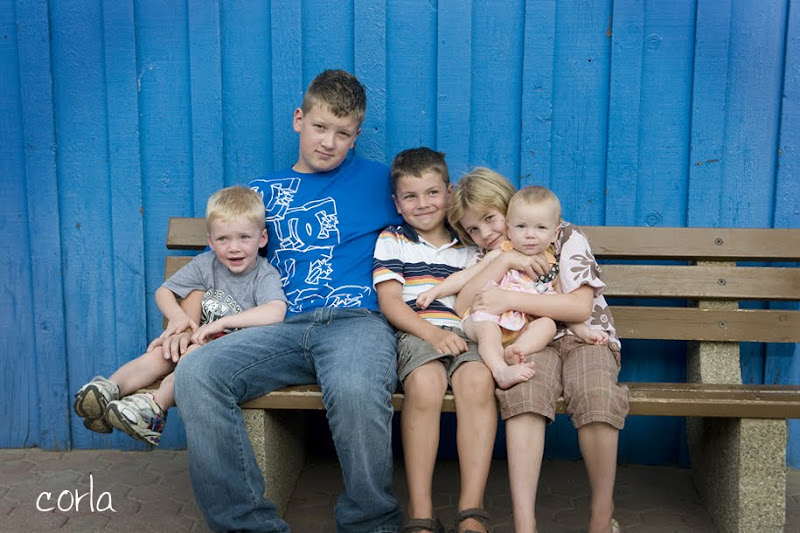 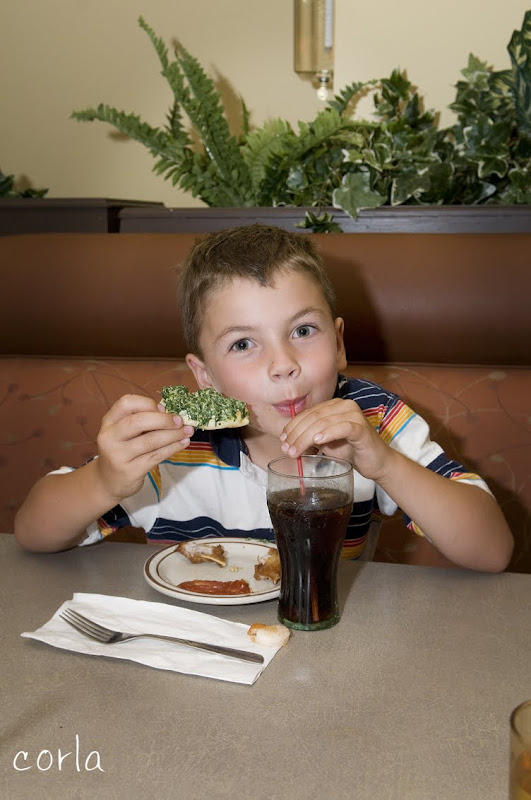 Ohh Ellie I can't believe you fell for the "try this lemon" trick. 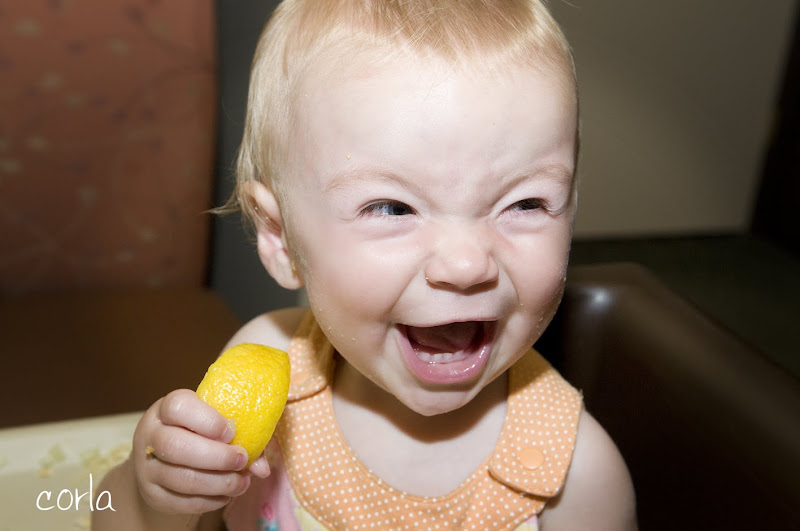 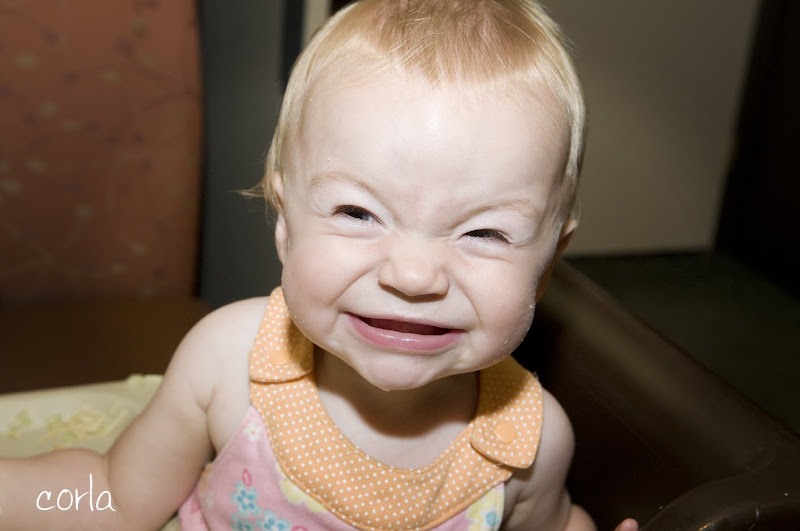 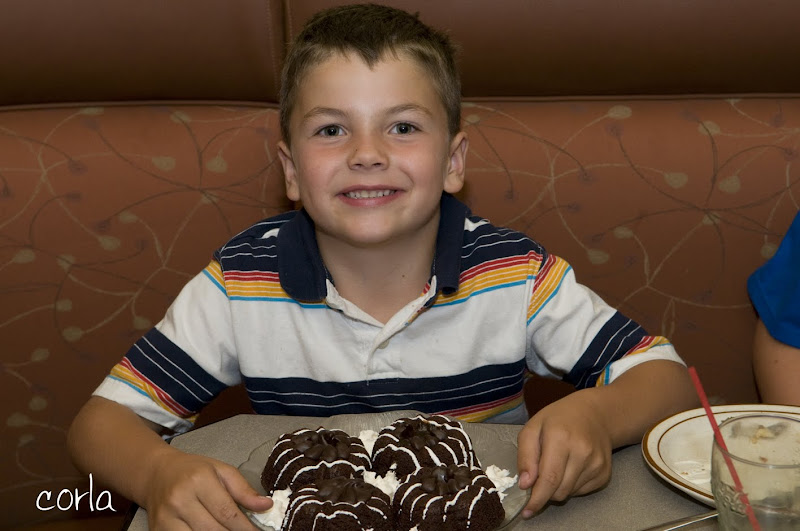 I ended the night with the playschool meeting where after having kids in playschool for six years I was the one mom who showed up with no checkbook. The teacher talked about how the kids and parents go through a hard time saying goodbye and there will be tears when you drop them off for the first time. I know Carson and I will say "see ya later!" and we will both be smilin! 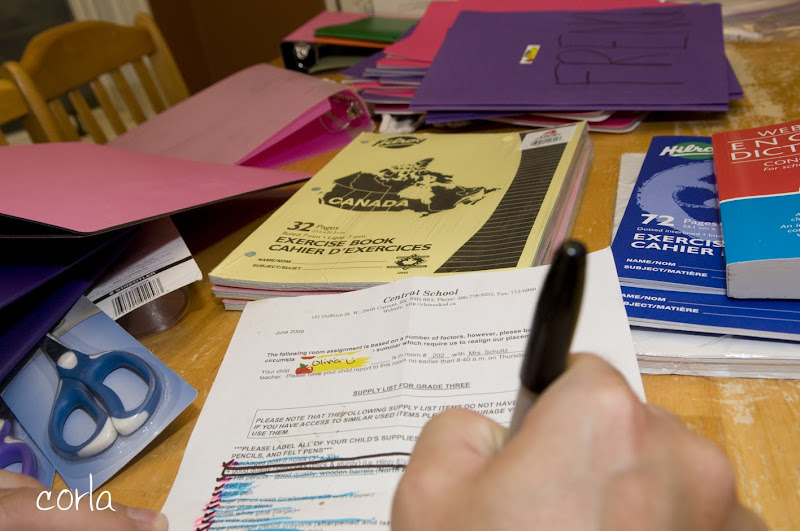 That's all from the circus house for today. Just tucked kids in and double checked school supplies and get ready for the annual first day of school picture in front of the school with all my kids. Let's see if I can make it three for three years making Levi cry because his mom is embarassing with the camera and all the babies!!
Posted by Corla Rokochy at 9:45 PM