Allow me to show my age here for a moment.  Back when I used to shoot Film ( No boys and girls pictures didn't always instantly pop up on the back of your electronic device.  The only instant pictures were Polaroids.  Once upon a time it would take between 1 hour and 1 week to get your pictures back!)  I would finish a job, say for example a wedding.  I would order a week or two ahead (sometimes only a few days because I had Devonna at Don's Photo looking out for me) 2 rolls of 400 speed film for the ceremony and 5 rolls of 100 speed film for the formals and maybe I would throw in a black and white roll as well.  That would mean at a wedding I would be taking a maximum or 200-350 pictures.

Now for a wedding I show the client 700-100 images and take probably 3 times that many. But at the end of the wedding or the family session I would come home and want to send the film back to Don's Photo and would have a few frames left so whatever was happening when I walked in the door I would photograph.  I wouldn't pose or plan I would just shoot the moment.

One would think with the evolution of digital I would have even more pictures than before as you can shoot and erase.  Take a million pictures if you like or even make your child a living flip book.  Just the opposite I actually printed less and less pictures.  Kelsey was 1 when I went digital and there are significantly less pictures printed of the last 3 than the first two!

So I now challenge myself to pull my camera out and photography the extraordinary every day moments and their perfect imperfections!

Here are a few from the vault...

In the middle of renos we had stuff everywhere.  There was a crazy rain storm outside so the kids entertained themselves climbing and running into the mattress.  Then used it to eat Ice Cream, Humpty Dumpty style. 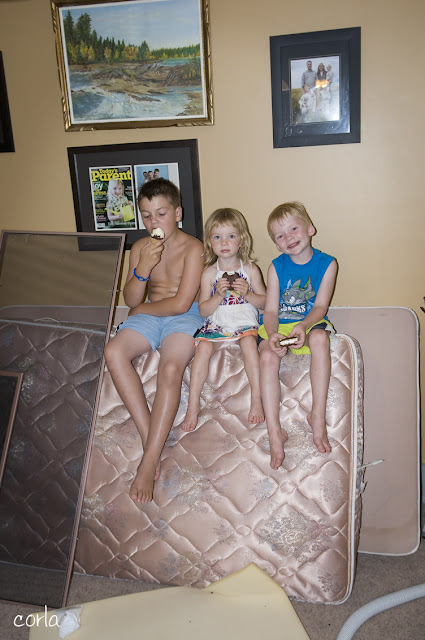 I think Ellie is having brain freeze. 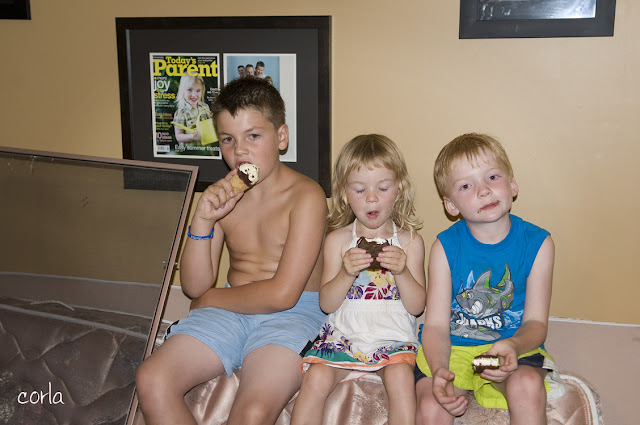 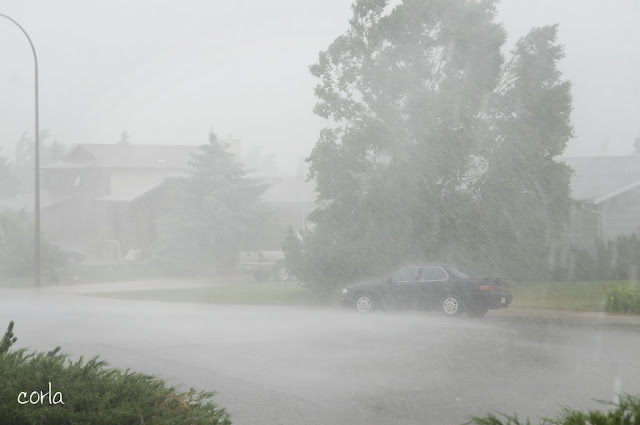 The kids checking out the rain! 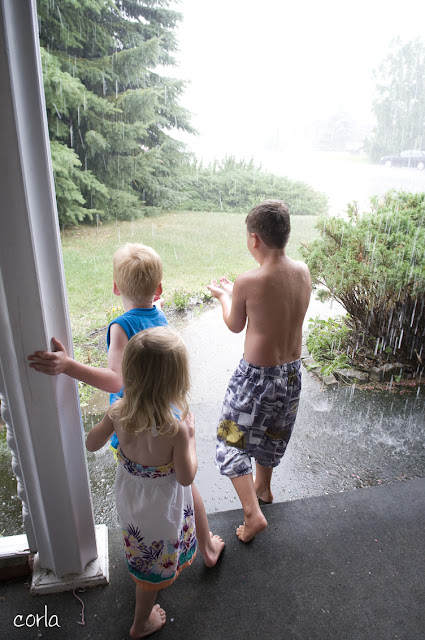 Here is an oldie of the kids raiding the cupboard. 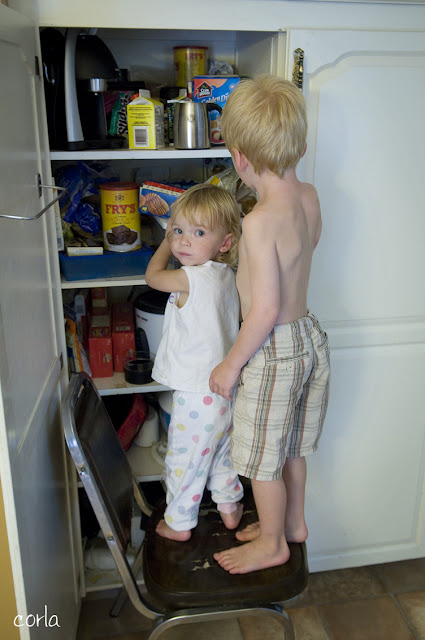 Turn your back and there goes a bag of Chipits. 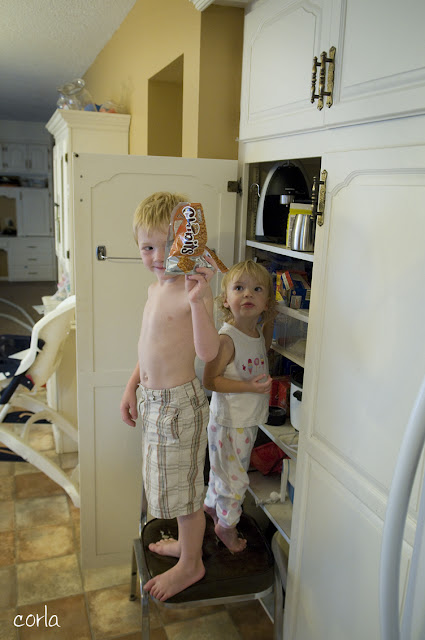 A lot of times I am taking pictures of what Pat is cooking.  Today was toasted buns, homemade fries, homemade burgers (usually containing bacon grease which makes them juicy and yummy) chipolte mayo and topped with sauteed mushrooms and swiss cheese.  This is how Pat rolls. 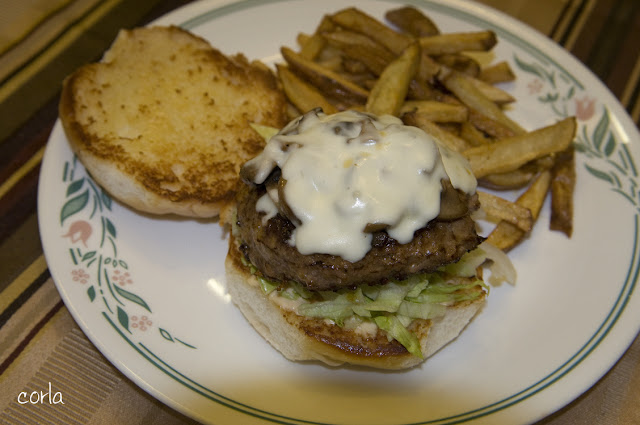 Also can't make a regular snack.  He has to spice up sausage and cheese. So now not only do I take a picture of the food.  This was a yummy Greek chicken. 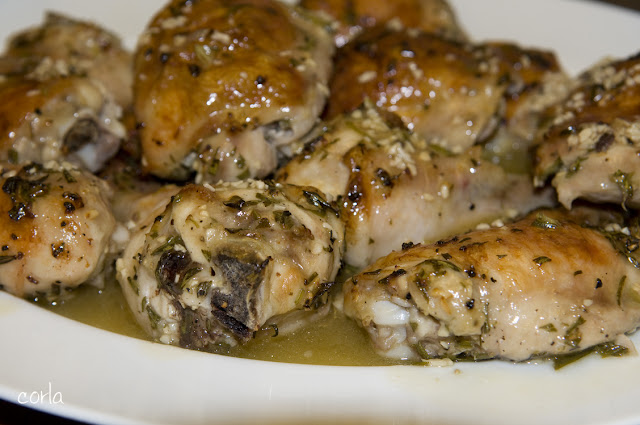 Now I try to take a random shot of the kids around the table.  Do you have pictures of your childhood just regular everyday moments?  Imagine how the kids will love to look back on the everyday chaos and fun.
This was a makeover she gave herself at the park. 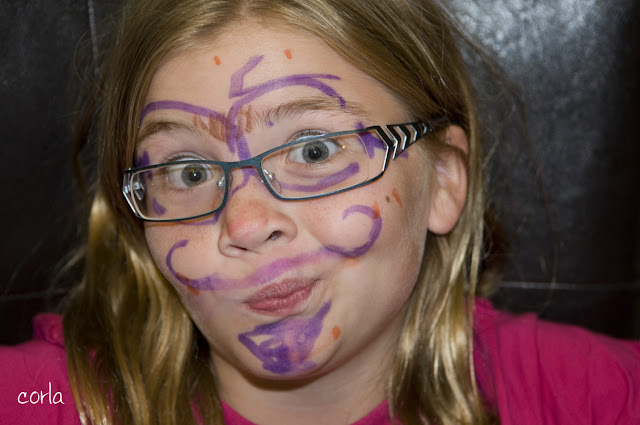 I can't believe he actually let me take his picture! 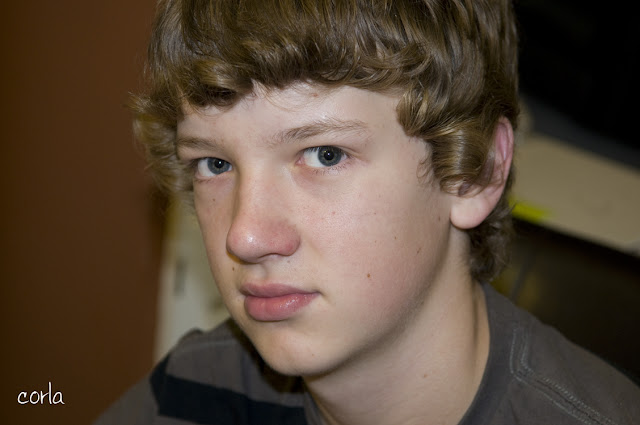 Not sure how much longer she will be in the highchair.  Put another chair at the table! 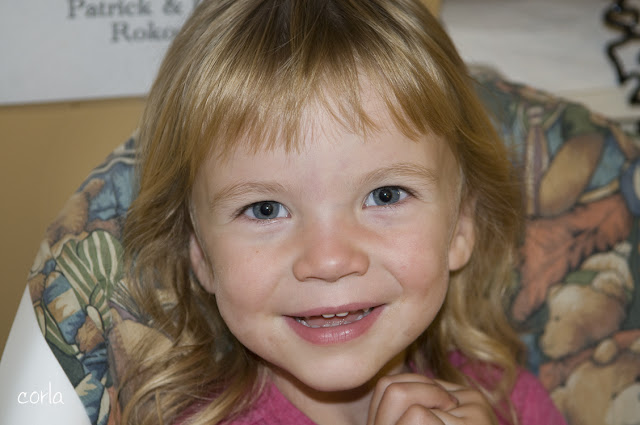 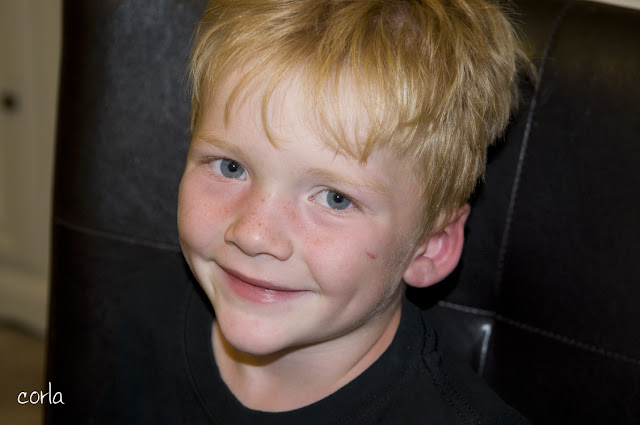 This is the waterboy because he sits so close to the watercooler.  He hates the job! 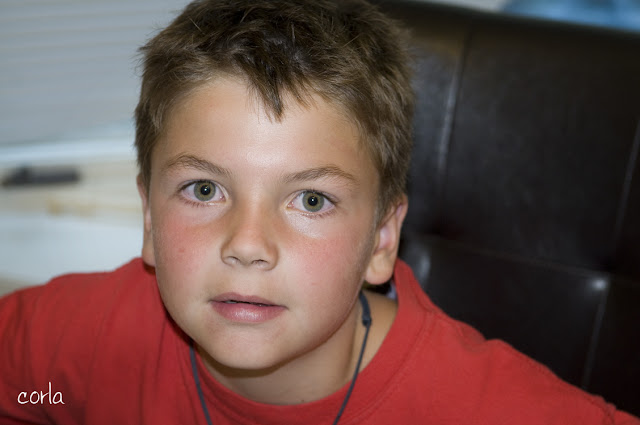 At our house meals aren't always around the table.  Here we are with an "egg in the hole" on the road and $20 from Grandma and Grandpa for his birthday! 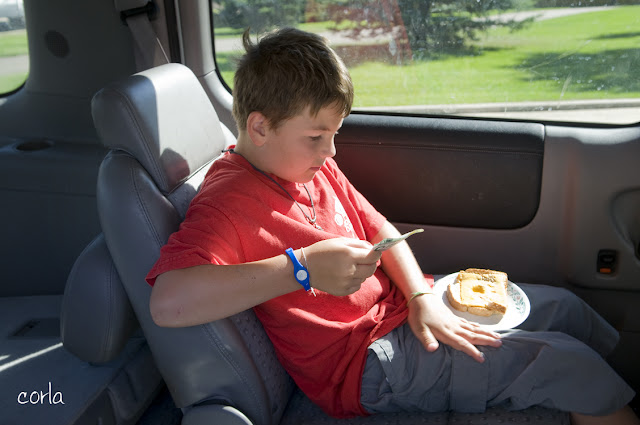 Even cleaning can be a fun memory.  The kids hate cleaning but I really do need their help.  On this Saturday we were cleaning up outside so the needles from the bushes were flying.  Kels thought he should have eye protection.  Notice who is the ONE kid working. 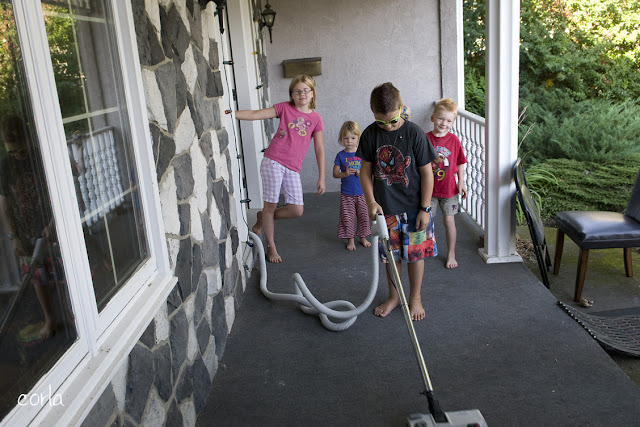 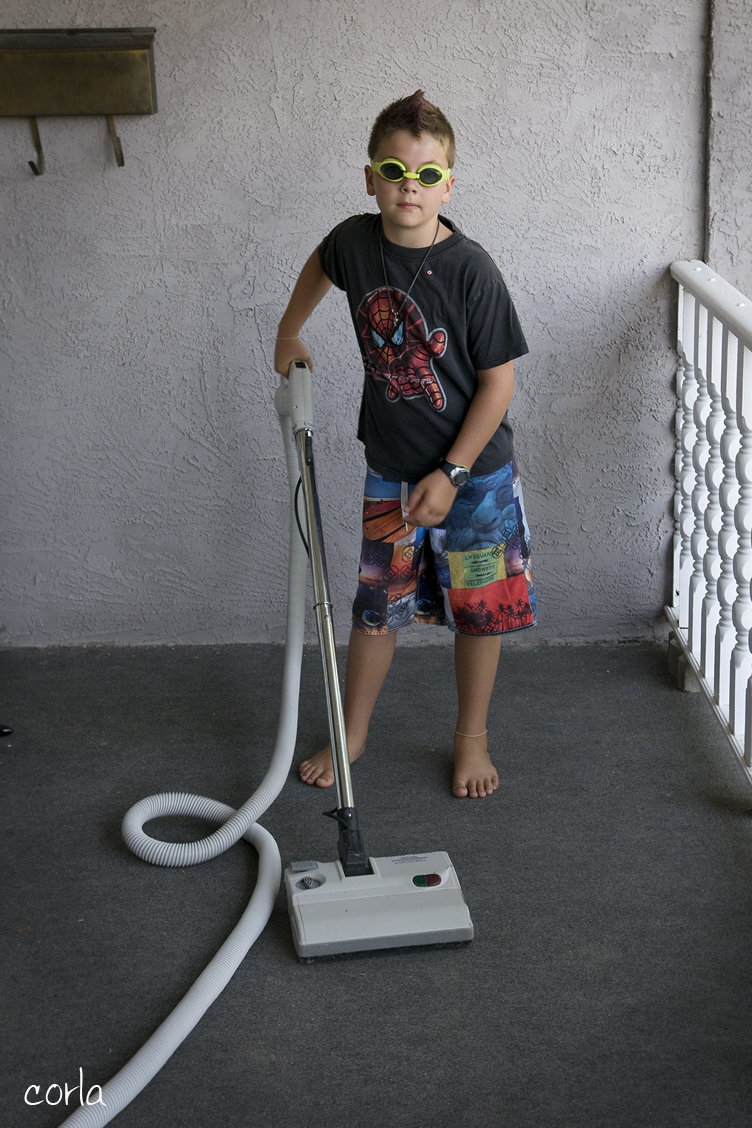 So the next time there is absolutely nothing special happening at your house.  Grab your camera and take a picture.  I wonder are these pictures nothing special or everything that makes our lives so special.

So you can tell your daughter when she herself is the mother of a 2 year old how you had to drag her from the the gas station parking lot because she couldn't have a pack of Juicy Fruit Gum. 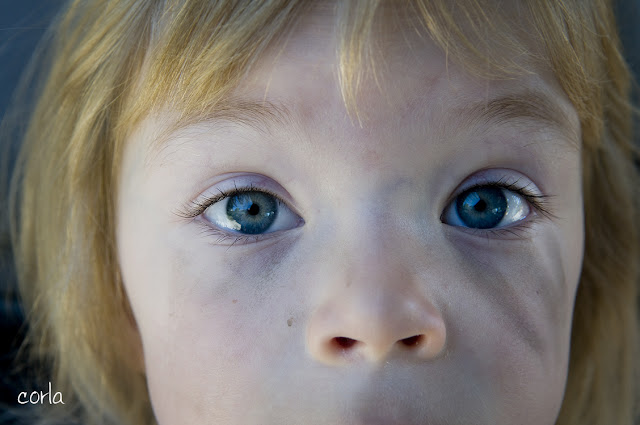 Or the best way to spend a lazy Sunday afternoon. 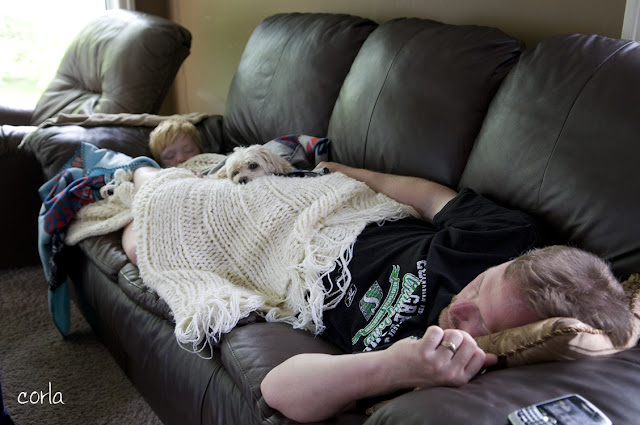 Enjoy the everyday!
Posted by Corla Rokochy at 8:10 AM