I asked the camera man to take my picture after the pitch. I am not used to being on that side of the camera. I wore my lucky "Bronco" Blue scarf! 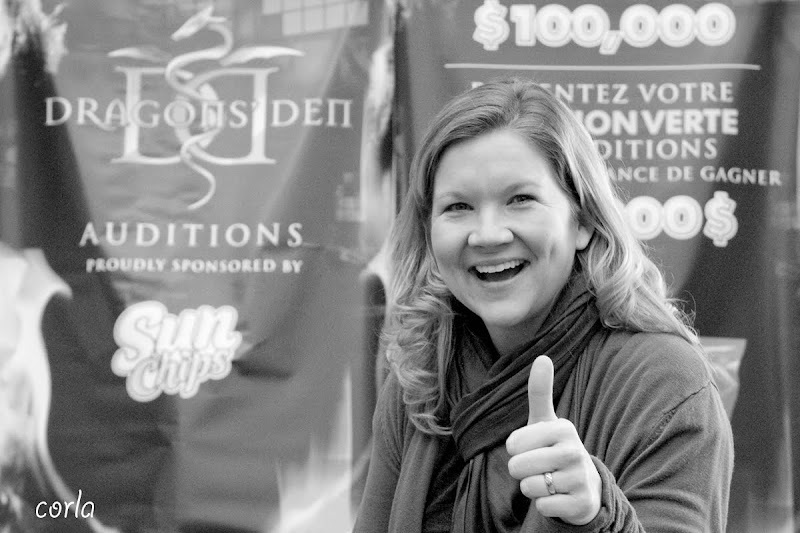 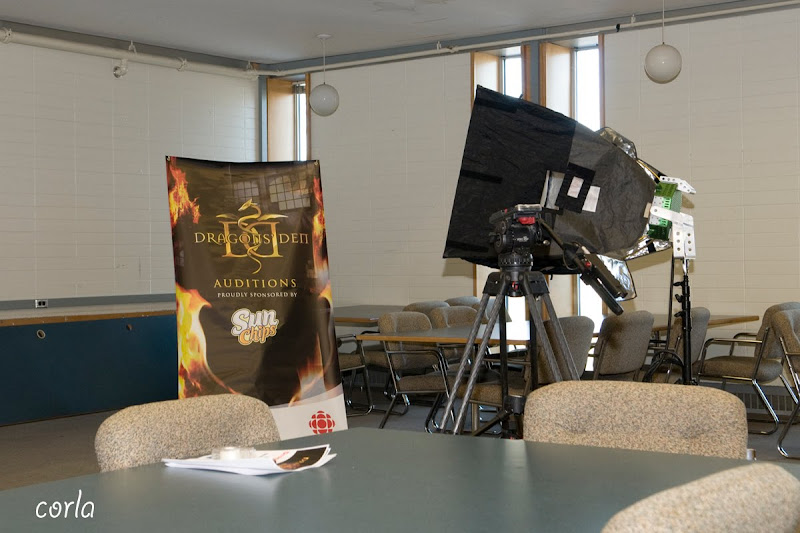 Please excuse my absence from blogging of late. I have been out in the world seeking adventure. My latest quest for excitement occurred this morning bright and early in Saskatoon Saskatchewan where I auditioned to be on the hit TV series "Dragon's Den". I have been patiently waiting for CBC to announce the audition schedule for the upcoming season. Our family watches the show each week together as we evaluate the pitch and try to guess if they will succeed in making a deal. There aren't that many shows on television that a family can sit down together and the kids and parents can be equally entertained so Dragon's Den has become part of the Wednesday night ritual for our household. When the host of the show Dianne Buckner announced that information about auditions was online I literally jumped off my couch and ran to the computer. The very first stop on the audition tour was Saskatoon. I wasn't sure if I would have the biggest or best pitch of the tour but one thing I was hoping was to have the very first road pitch of the tour and I did it! The audition wasn't nearly as scary as I was expecting. The producers were fun, warm and encouraging. They really want you to do well and were more interested in helping you improve your presentation then tearing it apart. I can't say how good my chances are of making it on the show as they only choose 300 or so from the over 3000 entries but I do know that if I hadn't auditioned then the chance of making the show would have been 0% so that makes the trip worthwhile!
My kids kept saying to me, "Mom you're not really going to go and pitch your idea are you?" I guess they don't know me that well after all. So many of the great things in my life have come about because I took a chance. I did something that may have seemed scary or overwhelming at the time but upon later reflection I am so glad I didn't let fear and common sense stop me. If I had used rational thinking I would have never gone on a blind date to a hockey game in 11 years ago with a guy I ended up marrying and being head over heels for to this day. If I had decided to take the easy road I probably would have stayed being a teacher and wouldn't have put an ad in the paper 13 years ago advertising my professional photography studio before I ever even owned a camera. I said I could do it and then figured out a way to make it happen afterwards. I have tried out to be a Rodeo Queen, Miss Canada, Miss Saskatchewan Roughrider, a Saskatchewan Roughrider cheerleader (which I quickly gave up when I found out there was no salary and you weren't allowed to date the players!). I also love entering contests which has lead to having my husband and family featured in Today's Parent magazine and giving me the opportunity to write a blog for the Today's Parent site where I am lucky to reach out to other parents across the country and hopefully provide some entertainment and information. My point is that you don't have to wait for experiences and opportunities to find you that you can make things happen.

And just because your life is filled with diaper cream and potty seats doesn't mean that you too can't have adventure. If you like to paint or sew or write poems or take pictures or if you want to run a marathon take the time for you to do something you enjoy. If you want to share what you do with the whole world or just keep your talent to yourself find a way to do something for yourself so that you will be a more whole person for your family and to be a role model for your kids that you can pursue a dream. But my advice to you is to get up off your couch a do something don't watch life from the sidelines, get in the game! I am not interested in creating a "Bucket List" of things to do before I die rather I am adding to my "Life List" which is a compilation of things that I was not afraid to go after no matter how crazy, unconventional or silly! Today I can add pitching to the Dragon's Den to my life list!
Posted by Corla Rokochy at 9:56 PM

Good luck on being picked for the Dragon's Den Corla!

Way to Go! You have just lived one of my goals!! I watch dragons den every wednesday and shark tank! Were you nervous? I hope they love idiotsocks!
Just to let you know, i absolutely LOVE your blog! And your photography! Its one thing to blog and have your readers picture what it all looks like but to include the snapshots is awesome! I just started blogging today - missadventuresbymorgan.blogspot.com I am pumped that i am finally going to do this and hoping i can keep up! Any tips for a new blogger?

Anyways, keep up the blogging. you make me laugh everyday!!

Great advice. Everything was well said. Good luck with the Dragons!