Our cross province Christmas adventure started with driving to my Mom's house.  We had a great family get together with a Turkey supper and all the trimmings and then the annual boys take on girls Trivial Pursuit grudge match.

The best part of the evening was when Levi's Uncle turned him into a pretzel!  It's a right of passage to try and beat up your uncle and then realize nope you aren't there yet. 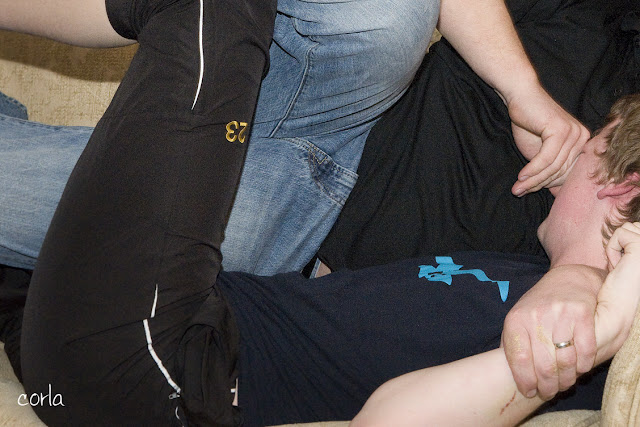 Great shot of the Snappy Sock! 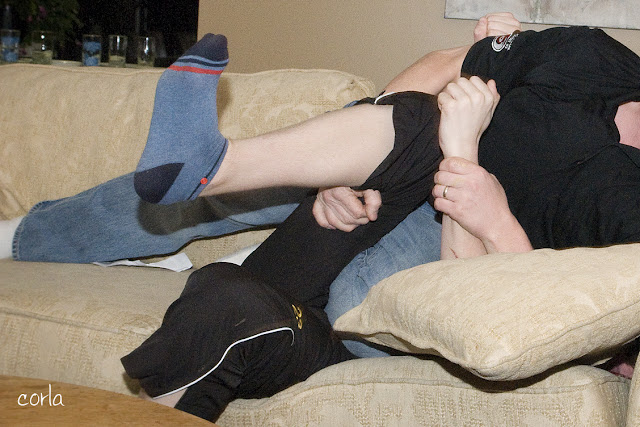 Grandma Vanna has to step in to separate the boys. 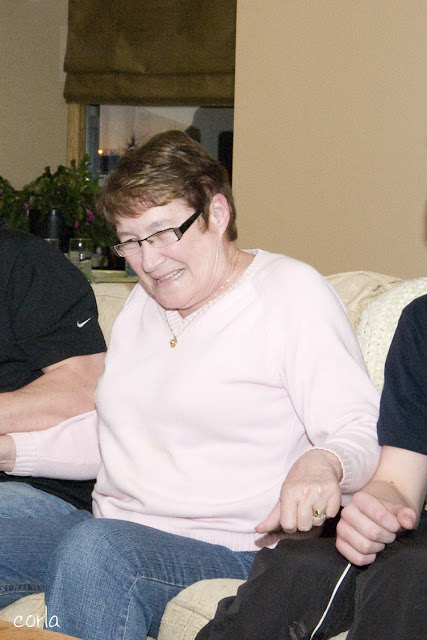 The kids get their own table.  Boys at one and girls at the other!  We had such a great time.  The best is going to the Senior Hockey game.  You get to catch up with everyone in one place! 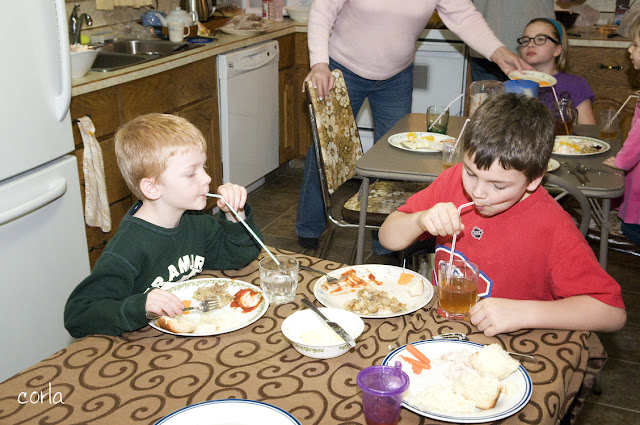 Then we were off to Foam Lake to spend time with Pat's family.  The kids still love to sit on Baba's knee. 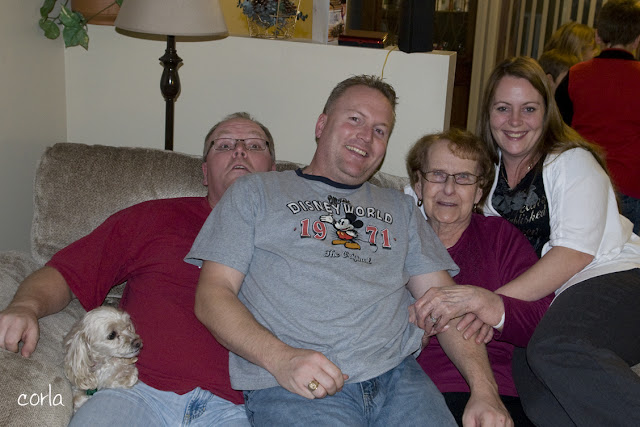 I love this picture.  Grandma and Grandpa dancing to Boney M in the kitchen while Pat is tending the stove. 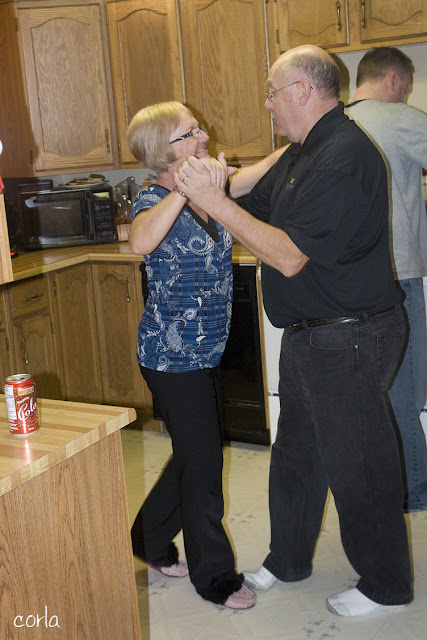 Since Levi can't take on his Uncle in Davidson he wants to beat up his Aunty in Foam Lake!  How dare she try to take Levi's phone from him! 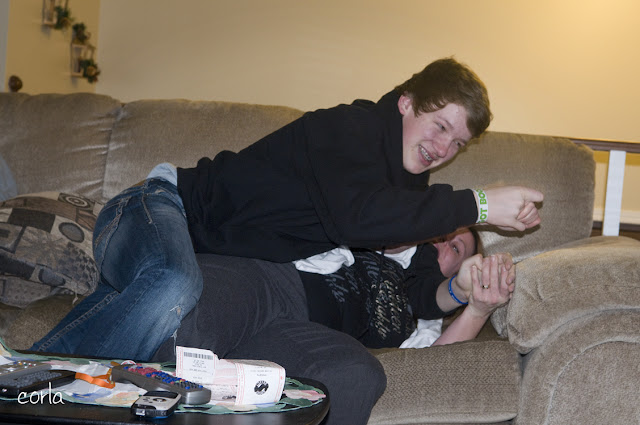 Pat's parents are retired and planned 5 meals a day!  They were cooking for a month to get ready for us.  Here was the late night fondue!  So Good!!!! 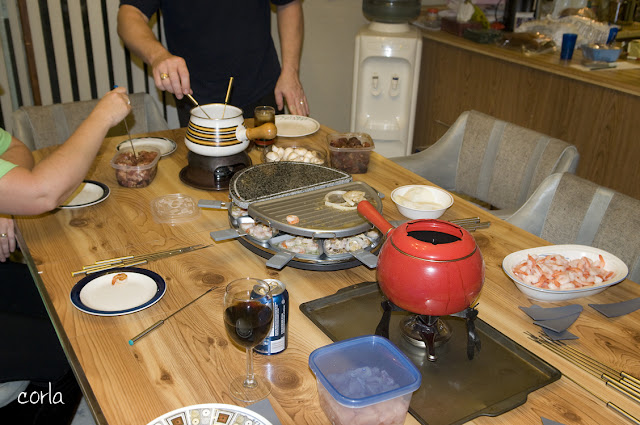 It was a pretty traditional Christmas.  Love, presents, food and fun!  Our family has traveled every year away for Christmas.  Last year we slept in our own house for the first time in 10 years of marriage.  This year I realized Levi will only be in High School for 2 more Christmases and then he may be wanting to come home for Christmas himself!  The time we spend with cousins, Aunts and Uncles and Grandparents is so important to all of us we wouldn't miss it for the world.

Pat's extended family also gets together twice a year.  Once to golf in the summer and again at Ukrainian Christmas.  The kids have formed close ties with their second cousins and love celebrating their culture. 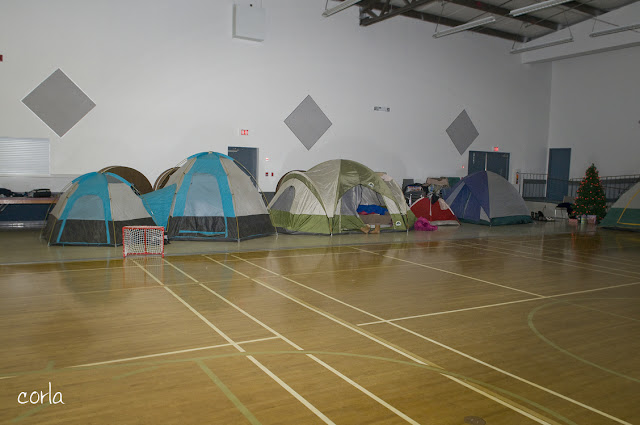 This year was a new adventure.  There were 45 of us at Christmas and we set up camp at the hall.  We slept, danced, ate and lived there for the weekend!  It was an amazing winter camp in.

Here are the chefs in the kitchen preparing our appy.  Pat's mini pizzas.  Don't worry if you missed them there will be another appy along in 5 minutes! 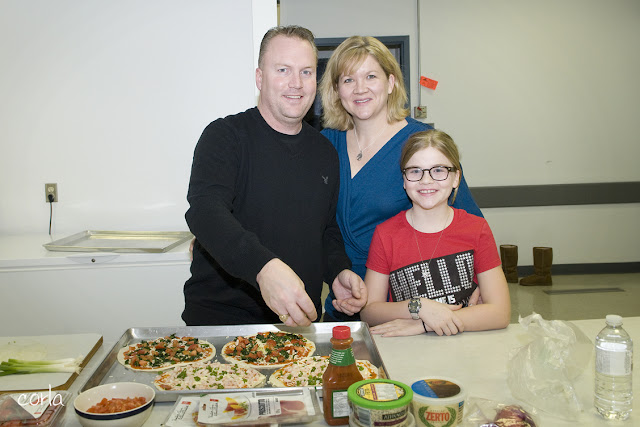 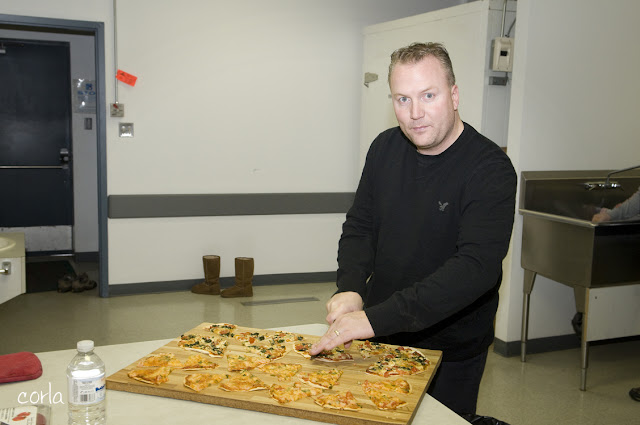 These are so great and easy. 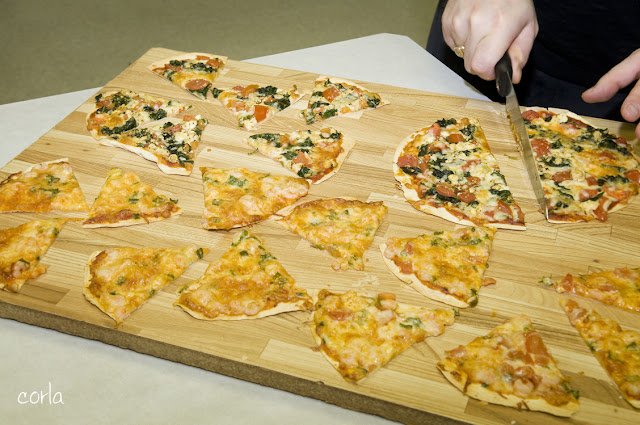 Aunty and Uncle did some experiments with the kids.  This one is milk and a couple drops of food coloring. Then you put in a drop of dish soap. 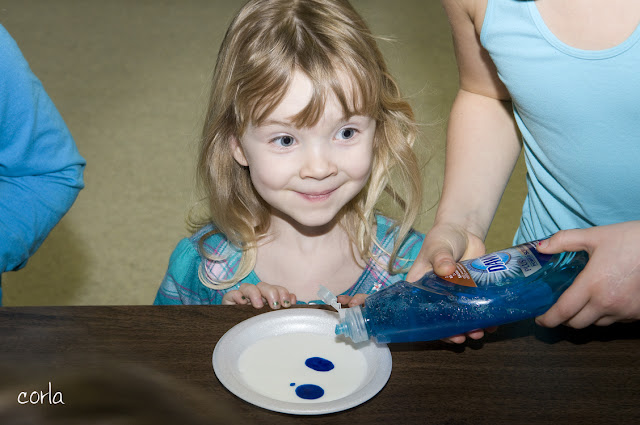 And voila it makes a neat pattern.  I wish they always found dish soap so fascinating. 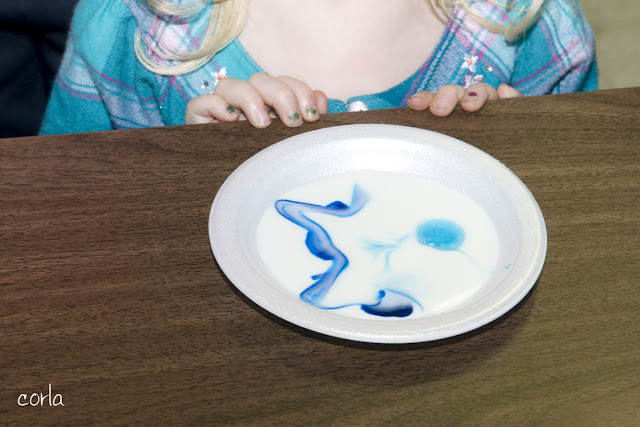 Then they took playdough.  Filled it with Baking Soda, a drop of food coloring and added vinegar and made a mini volcano. 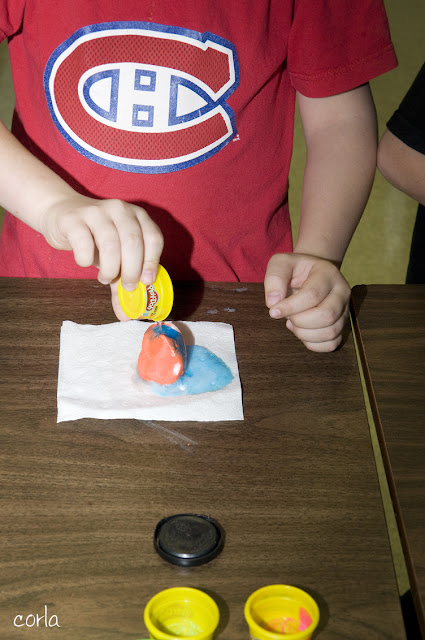 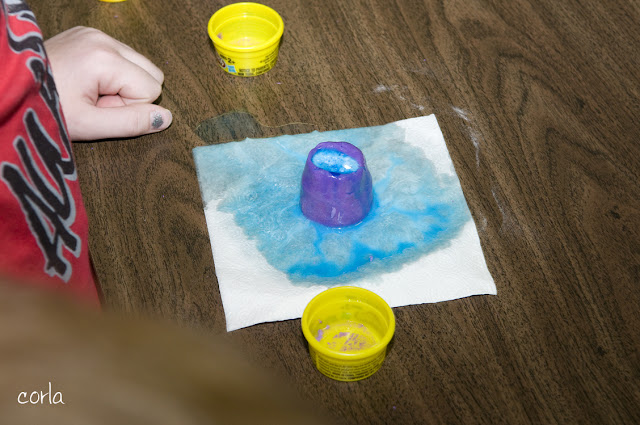 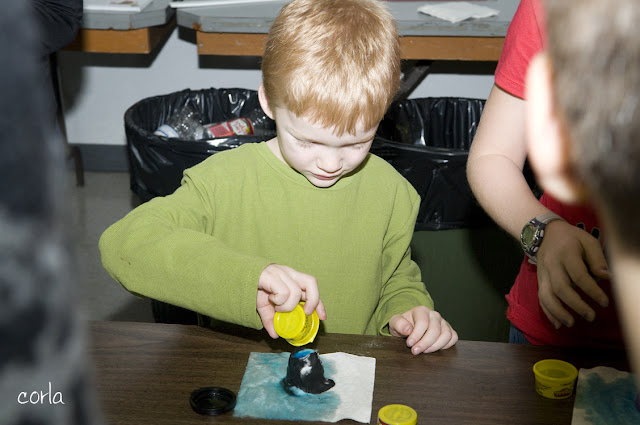 There were movies on the wall, cards, cribbageb, old home movies, board games, a flash mob, and then a talent show including Ukrainian dancing. 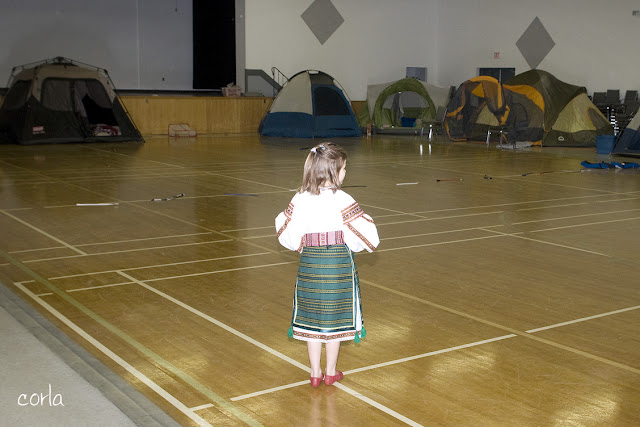 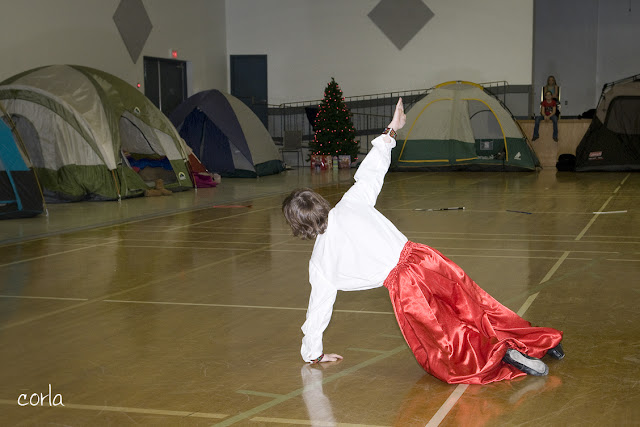 Now Ellie makes me put Ukrainian dancing on You Tube and she puts on this outfit which she calls her Ukrainian outfit and dances. 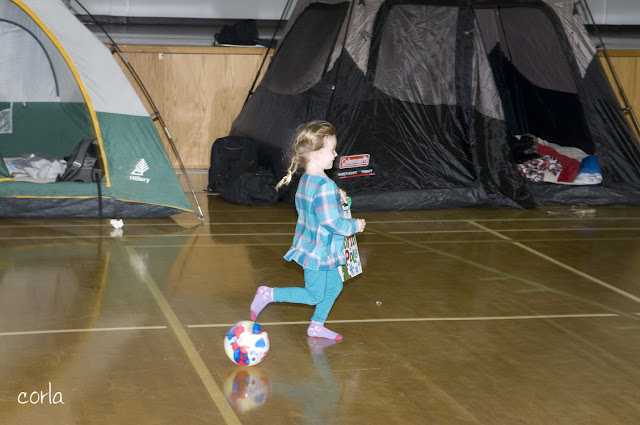 After a grand total of 18 hours of driving, 8 billion calories consumed, 298 hugs, countless presents and even more memories we are so thankful to have such great families to share our Christmas Celebration with and we can't wait to do it all again next year.
Posted by Corla Rokochy at 8:00 PM